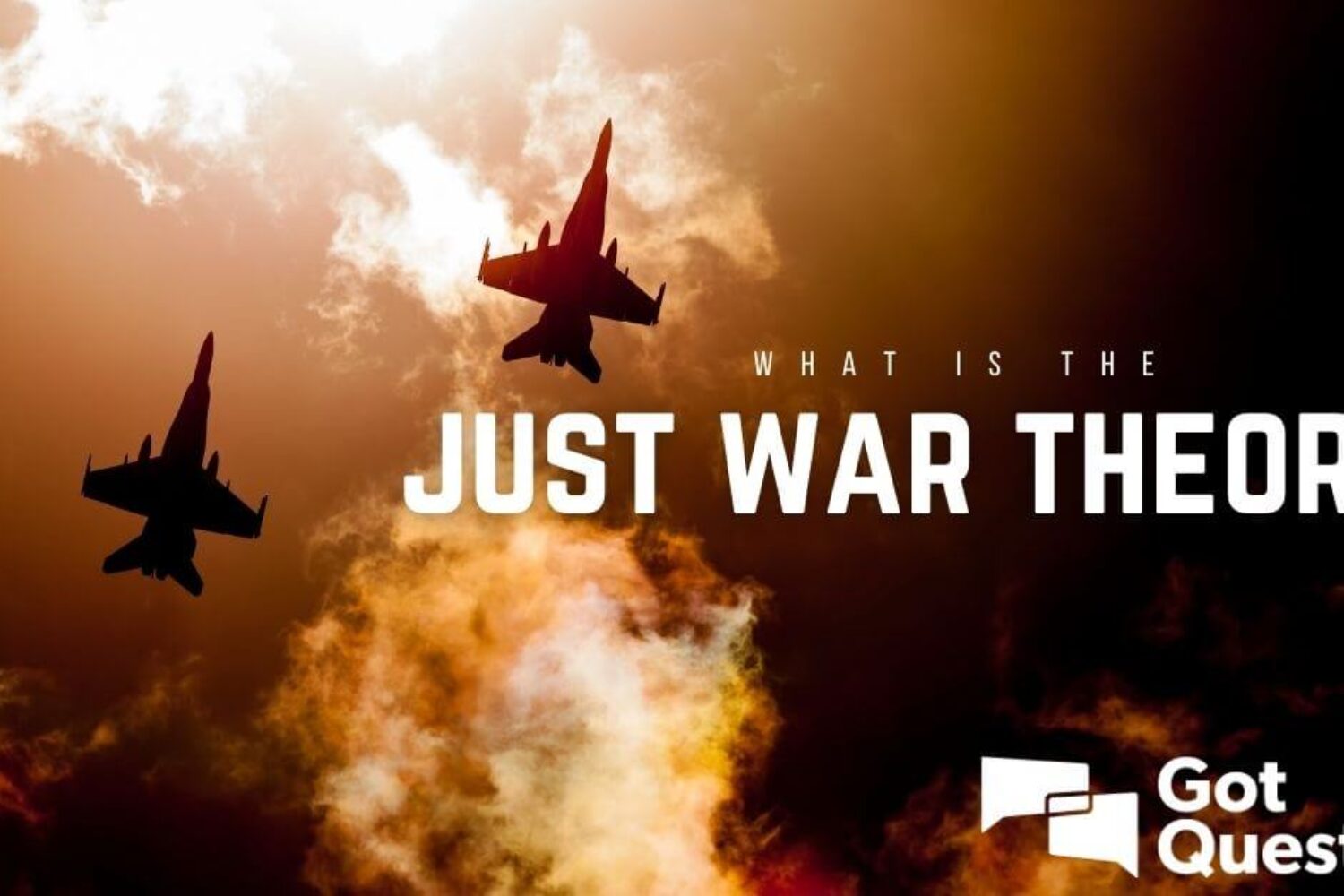 WN: There is in Jesus no legitimate “just war theory.” There are many posts pointing to that on this website here and here.

Pope Francis right now is exhibiting great leadership in relation to the Russia-Ukraine war. He shows the way to peace, by demonstrating that peace is the only way. Ultimately, Jesus, the Prince of Peace, is The Way. We are called to imitate that way. In short: we are never to take up arms.

In my dad’s souvenirs from fighting in World War II, is an emblem with the words: Honi soit qui mal y pense. The Wikipedia article explains that it is a maxim in the Anglo-Norman language, a dialect of Old Norman French spoken by the medieval ruling class in England, meaning “shamed be whoever thinks ill of it (taking up arms),” usually translated as “shame on anyone who thinks evil of it.“[1]

We followers of Jesus are called, au contraire, to think absolute ill of it! Point Final!–as said in French. Full stop! The great Church Father Tertullian said it best, as seen in the adjacent image. Full stop! End of revelation!

We read in the article highlighted below (emphasis added):

For Francis, accompaniment is about not perpetuating the violent dynamic as much as possible.

“There was a time, even in our churches [especially in our churches!], when people spoke of a holy war or a just war,” the pope told Russian Orthodox Patriarch Kirill in their March 16 video meeting. “Today we cannot speak in this manner. A Christian awareness of the importance of peace has developed. Wars are always unjust, since it is the people of God [who are made in God’s inviolable image] who pay. Our hearts cannot but weep before the children and women killed, along with all the victims of war. War is never the way.“

A slight quibble with the title and intimation of the article: Even if nonviolence proves non-effective, ours as Christ followers is not a utilitarian call to use of nonviolence–only if effective. Ours is quite simply a call to faith/faithfulness (the biblical Greek word pistis covers both senses) in/to Jesus: that is to peace through nonviolence. Full stop! End of revelation!

So much energy is being expended to urge Pope Francis to justify violent resistance. The latest episode of this is the war in Ukraine. Journalists, scholars, politicians and some religious continue to press the pope to join the chorus of people perpetuating the violent dynamic.

My sense is that the pope is trying to shift our gaze. It is a shift that he senses Jesus models. A shift toward pastoral accompaniment and a focus on how we might break the violent dynamic. It is not about condemning or judging people in very difficult situations, like some Ukrainians who choose to take up arms in violent defense of their country. It affirms and admires their willingness to take a high-risk stand against injustice rather than to be passive. At that same time, it is also not about justifying methods of war and enabling the violent dynamic to perpetuate and spread.

Wars are always unjust, since it is the people of God [all made in God’s image] who pay.—Pope Francis

Francis speaks of accompaniment as the way of God, as in his March 20 Angelus address: “God trusts us and accompanies us with patience. He does not get discouraged, but always instills hope in us. … He does not keep track of your shortcomings but encourages your potential. … In this way God accompanies us: with closeness, mercy, and tenderness.”

Such accompaniment is being done in a variety of creative, courageous, nonviolent ways by Francis as well as by Ukrainians and others. It also includes humanitarian resource provision, identifying credible messengers and persistent needs-based diplomacy, coalition building, consistent public statements, impacting Russian leaders’ sources of power, prayer and shared physical risk.

Examples of Ukrainian nonviolent action include them blocking convoys and tanks, and standing their ground even as warning shots were fired in multiple towns. In Berdyansk and Kulykіvka, people organized peace rallies and convinced the Russian military to get out. Hundreds protested the abduction of a mayor, and there have been protests and refusals to shift to the ruble in Kherson to resist becoming a breakaway state.

Before the danger of self-destruction, may humanity understand that the moment has come to abolish war, to erase it from human history before it erases human history!—Pope Francis in his March 20 Angelus address

Ukrainians have fraternized with Russian soldiers to lower their morale and stimulate defections. Ukrainians have courageously evacuated many people from dangerous areas. The Ukrainian League of Mediators is helping address increasing polarization within Ukrainian families and communities, in order to minimize the violence.

Russians have participated in numerous anti-war protests, and around 15,000 people have been arrested. Journalists have interrupted and resigned from state TV. Nearly 100,000 Russians from a variety of sectors have signed petitions to end the war. Russians from all parts of society have spoken out against the war — from members of the military and connected to the foreign ministry to members of the Russian oil industry and billionaires, as well as nearly 300 Russian Orthodox clerics. Meanwhile, hundreds of soldiers have refused to take part.

Today we cannot speak in this manner. A Christian awareness of the importance of peace has developed. . . Our hearts cannot but weep before the children and women killed, along with all the victims of war. War is never the way.—Pope Francis

In their 2011 volume, Why Civil Resistance Works,1 researchers Erica Chenoweth and Maria J. Stephan analyzed more than 300 contemporary cases and showed that nonviolent resistance is twice as effective as violent resistance and at least 10 times more likely to lead to durable democracy, including against authoritarians. Additional research has corroborated these patterns. This is notable in light of many claims that violent resistance is necessary to defend democracy. Francis invites us into recognizing conflict as a process with a long-term view, both forward and backward.

Such research shows why war not only makes it at minimum harder for a durable democracy but also is “the suicide of humanity” and a defeat for humanity, as Francis exclaims. War, therefore, is not consistent with a ‘humanitarian’ initiative or activity in accord with human dignity. Pope Francis explains that war is a “stinging defeat before the forces of evil,” rather than a necessity to confront evil.