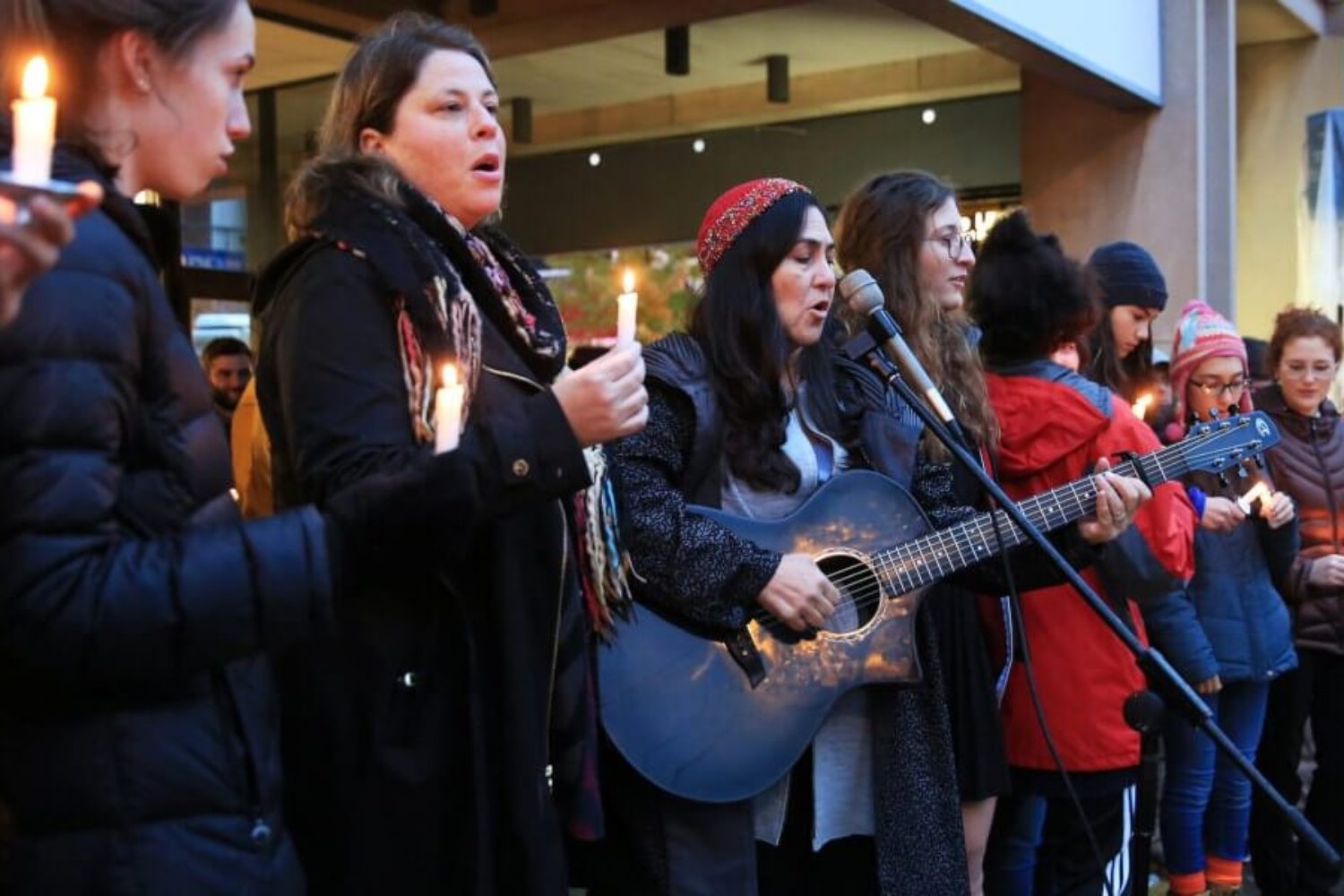 photo above: Reaction to anti-Semitic violence in Pittsburg, October 2018

WN: World News Daily Information Clearing House tends towards right wing distortion. But it carries as well great analysis such as that highlighted below.

Eleven people were killed in the slaughter in Pittsburgh, which occurred during religious services Saturday morning. Among the predominantly elderly victims were two brothers and a husband and wife, aged 84 and 86. Another victim was Rose Mallinger, 97. The shooter, Robert Bowers, has been charged with 11 counts of criminal homicide and 13 counts of ethnic intimidation.

While the United States is no stranger to anti-Semitism, an act of mass violence targeting Jewish people on this scale is unprecedented. As one commenter in the Israeli newspaper Haaretz wrote, the “illusion that ‘this can’t happen here’ has been shattered. American Jews will wake up the next day to a new and far more frightening future, knowing not only that it has happened here, but that the attack could portend similar assaults in the future.”

To understand the significance of this act it is necessary to place it not only in its domestic, but also its international and historical context.

The attack is a direct product of the open appeals to fascist violence by the Trump administration. Bowers was evidently motivated by a combination of rabid anti-Semitism and anti-immigrant chauvinism. He posted comments on social media just prior to the attack linking his hatred of Jews to the efforts of the Hebrew Immigrant Aid Society (HIAS), with which the Tree of Life synagogue is affiliated, to assist refugees fleeing Central America. “HIAS likes to bring invaders in that kill our people,” he wrote. “I can’t sit by and watch my people get slaughtered.”

The language he employed, including the use of “invaders” to refer to migrants fleeing poverty and violence in Central America caused by US imperialism, is that of the Trump administration. In a speech last week, Trump referred to the caravan of migrants heading for the US border as “an assault on our country.” He called it an invasion that threatened to destroy “your neighborhoods, your hospitals, your schools.” In remarks laden with anti-Semitic and fascistic tropes, Trump denounced those who “want to turn the clock back and restore power to corrupt, power-hungry globalists…”

The attack on in the synagogue follows the string of pipe bombs sent by a Trump supporter to prominent Democrats.

Trump himself is a symptom, however, not an explanation. What brought Trump to power?

The consequences of the financial crisis of 2008 and the pro-Wall Street policies of the Obama administration, which enabled the right wing to posture as defenders of the “forgotten man.” The impact of more than a quarter-century of unending war, 17 years under the banner of the “war on terror.” The turn by the ruling class and both Democrats and Republicans to ever more authoritarian forms of rule in response to growing resistance from the working class.

While Trump seeks to cultivate an extra-parliamentary movement of the far-right, the Democrats promote the FBI, the CIA and the military as the guarantors of stability against those who “sow divisions” and discontent.

The international context underscores the fact that far more is involved than simply the Trump administration. The growth of far-right and fascistic movements and governments is a global phenomenon.

In the Philippines, it has produced Rodrigo Duterte, who has praised and helped organize vigilante death squads.

In India, Prime Minister Narendra Modi is a member of the fascistic RSS. As chief minister of Gujarat, he helped organize the 2002 riots that killed hundreds of Muslims.

Throughout Europe, far-right and fascistic parties have been systematically promoted by the ruling class. Particularly significant are the developments in Germany. In the country that produced Hitler and the most horrific crimes of the 20th century, including the slaughter of six million Jews in the Holocaust, fascism is once again a major political force.

The fascistic Alternative for Germany (AfD) is the main opposition party, deliberately cultivated by the parties of the political establishment, the Christian Democrats and the Social Democrats, which have at every turn adapted to and embraced its anti-immigrant chauvinism.

Last month, AfD head Alexander Gauland published a column in the leading newspaper Frankfurter Allgemeine Zeitung that paraphrased a speech by Hitler. The state, meanwhile, in alliance with the AfD, has moved to criminalize left-wing opposition to fascism.

The significance of the rise of fascism in Germany has been almost entirely ignored by the American media, including the New York Times. The efforts of reactionary historians to rewrite German history and relativize the crimes of the Nazis have provoked no opposition from the liberal establishment, including a corrupt academia in the United States.

The universality of this process is underscored by the fact that among those countries where fascism is on the rise is Israel itself. The hatred of Jews is a specific form of a virulent brand of nationalism that in Israel is expressed in state-sanctioned and organized violence against Palestinians. Israeli Prime Minister Benjamin Netanyahu, who recently oversaw the passage of the “Nation-State Law” enshrining Jewish supremacy, has made common cause with far-right and fascistic forces in Europe, including Hungarian Prime Minister Viktor Orban.

Finally, the international growth of fascistic movements must be placed in its historical context. What is the significance of the reemergence of fascism, 85 years after the coming to power of Hitler and nearly 80 years after the outbreak of the Second World War?

Today, approaching 30 years since the dissolution of the Soviet Union by the Stalinist bureaucracy, the essentially reactionary character of what transpired in 1989–1991 is exposed before the entire world. The fascist disease, which was somewhat in remission during the period following World War II, has powerfully reemerged. The end of the USSR produced not a flowering of democracy, as the propagandists of capitalism prophesied, but an explosion of inequality, imperialist war, authoritarianism and a revival of fascism.

The most fundamental target of right-wing reaction is the working class. Just as fascism arises out of capitalism, so does the class struggle. The development of the class struggle and the growing interest in socialism terrify the ruling class. Masses of workers are moving to the left, not the right. There is deep and growing hostility to social inequality and the preparations of the ruling class for war.

It is a sign of the desperation of the ruling class that, at the first sign of social opposition, it calls forward fascist violence. In the 1930s, while fascist movements acquired a mass base, what made possible their ascension to power in Germany, Italy and Spain were the political conspiracies of the ruling elites. Today, the deliberate instigation of fascism from above is an even more dominant factor.

Capitalism is again posing before mankind the alternatives: socialist revolution or capitalist barbarism. All the talk in the media about the need to “restore civility” and end “divisive political rhetoric” are empty platitudes that evade all the critical issues. What must be abolished is the capitalist system itself.

Eighty years ago, in 1938, the Fourth International was founded to resolve the crisis of revolutionary leadership in the working class in response to the betrayals of Stalinism and Social Democracy. At the very center of the political program of the new international was an assimilation of the lessons of the victory of fascism in Germany in 1933, the greatest defeat of the working class in history.

The most important lesson was the impossibility of fighting fascism except on the basis of a revolutionary socialist and internationalist program. As the horrors of the 1930s reemerge once more, this understanding must be brought into the working class through the building of a socialist leadership, the International Committee of the Fourth International and its sections in every country, such as the Socialist Equality Party in the United States, which connect the fight against fascism with opposition to inequality, war and the capitalist system.

This article was originally published by “WSWS“