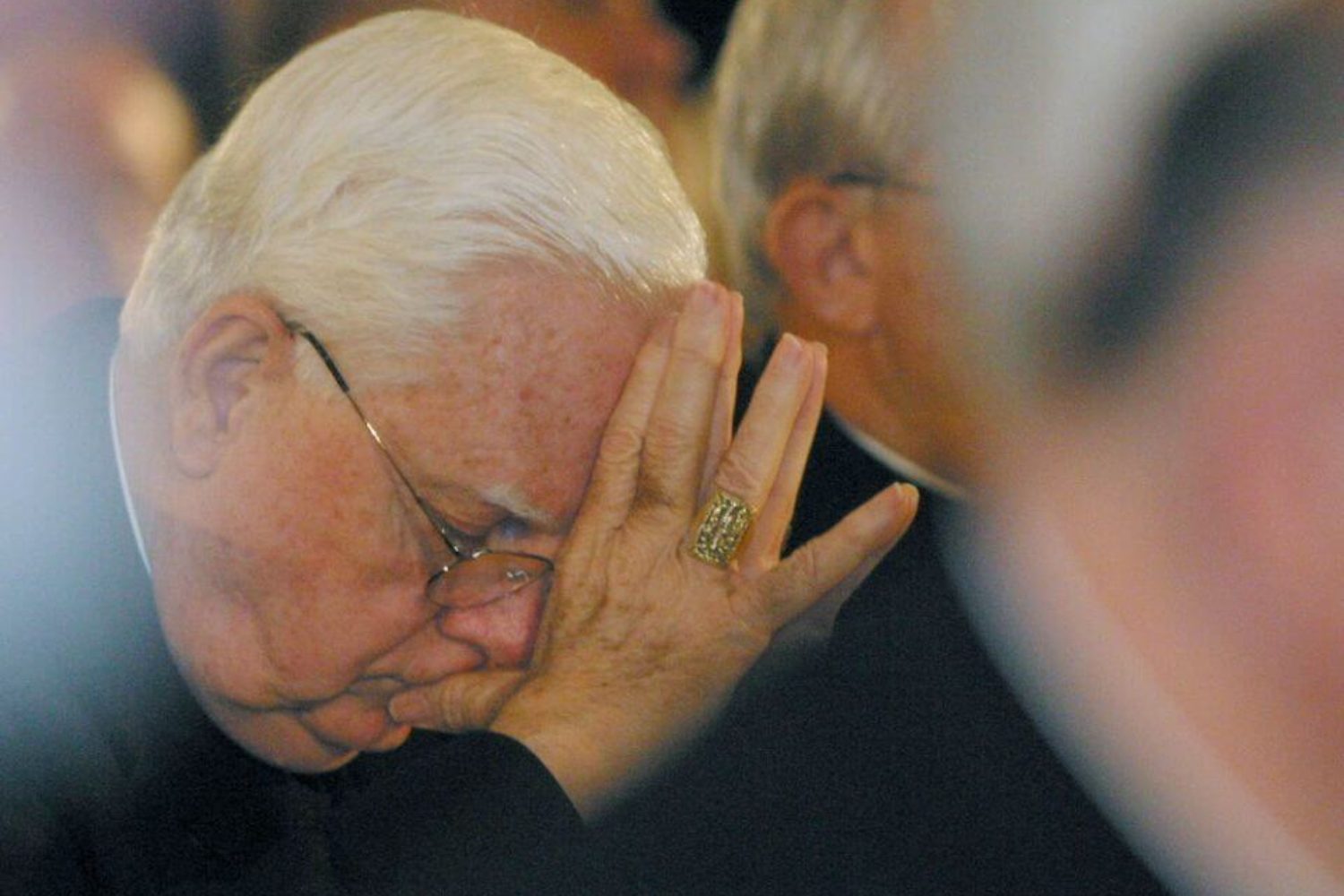 photo: Boston Cardinal Bernard Law bows his head as a victim of clergy sexual abuse begins to address the U.S. bishops in 2002 in Dallas. (CNS/Bob Roller)

WN: The events below focus mainly on Bernard Law and as archbishop his cover-up of clergy sexual abuse in Boston. My wife, daughter and I earlier this year watched the wrenching film Spotlight about the horror story. Law died December 20, 2017, and hence the reflection highlighted below. As the movie rightly points out, the cover-up went up the chain all the way to Pope John Paul II. Even in death, there was Mass conducted in St. Peter’s Basilica on December 21 at which Pope Francis said the final prayers. Still a kind of cover-up.

British Roman Catholic Lord Acton rightly observed that “power corrupts…” Not of course invariably. But when it does, as in Law’s case, there are untold victims who suffer, not least in this case, revictimization at the hands of ruthless Church lawyers.

But why cover up? The psychology of it is as variable as human nature. The reality of it in relation to sexual abuse, as again we have learned from Harvey Weinstein and the #MeToo phenomenon, is as ubiquitous as sin…

Public awareness of sexual abuse by Catholic clergy actually dates from 1984. It was triggered by the public exposure of widespread sexual violation of children by a single priest in the Diocese of Lafayette, Louisiana, and its systemic cover-up by the church’s leadership that lasted well over a decade.

Cardinal Bernard Law, who went from in 1974 being bishop of Springfield-Cape Girardeau, Missouri, to in 1984 being named archbishop of Boston, became the most powerful and influential Catholic bishop in the United States. This all came to a screeching halt in 2002. In one day Law became the face of hierarchical treachery and dishonesty when The Boston Globe revealed the systemic cover-up of widespread sexual abuse by Boston priests, most of it his doing. He remained the face of the hierarchy’s disgraceful attitude towards the violation of minors and the vulnerable. Even in death he remains the focal point of the anger and rage of countless victims of sexual abuse by clergy — certainly Boston victims, but also others worldwide.

Law’s role in the history of clergy abuse is more than the systemic cover-up in Boston. What is little known is the influential part he played in the early days when the extent and depravity of this evil was first exposed. In those very early days in 1984 and 1985, I believed that when the bishops realized the nature of sexual abuse and potential plague before them, they would lose no time in doing the right thing.

I began to talk to then-Bishop Law about the situation. He agreed about its severity and our predictions if the bishops ignored it. He and I spent a good deal of time discussing the danger posed by perpetrating priests and how bishops should respond to reports. He reviewed our proposed manual, which ended up being about 100 pages long and included several professional articles on pedophilia selected by Peterson.

The soon-to-be cardinal was well aware of the danger facing the church and especially the bishops if they remained inert. He helped work out three action proposals that would include in-depth research into every aspect of sexual abuse, a committee of bishops assisted by independent experts and an office at the U.S. bishops’ headquarters that would coordinate immediate responses to particular situations if such assistance was requested by the bishop. He was chairman of the standing committee on research and pastoral practices and offered to set up the sexual abuse committee as a sub-committee. It would be made up of bishops, but the real work would be done by carefully selected lay experts.

Law also assured us that he would “lobby” other bishops to get on board with the action proposals and the creation of the sub-committee. We had planned to meet with him at a Marriott Hotel in Chicago in May 1985. He had been recently named a cardinal, so we were not surprised when he phoned to tell us that he could not make the meeting as it was close to the time of the Vatican ceremony. In his place, he sent then-Auxiliary Bishop Bill Levada of Los Angeles. (Levada, now 81, would be named archbishop of San Francisco and in 2005, prefect of the Congregation for the Doctrine of the Faith under Pope Benedict XVI.)

Levada met with us for most of a day and was affirmative and approving of all the points of our agenda. About two weeks later, Levada informed me that the entire proposal had been shelved by the leadership of the bishops’ conference. The excuse was that it would conflict with the work of another committee that had been assigned the issue of clergy sex abuse. The conversation was short because I was too surprised to argue the point. Not long thereafter I called Law to ask what was going on. He told me he had opposed the move but was limited in what he could do since he had been in Rome when it happened.

Ironically the two others I had worked closely with and who provided valuable advice and support were Anthony Bevilacqua, then-bishop of Pittsburgh and later archbishop of Philadelphia, and Cardinal John Krol of Philadelphia. A 2005 grand jury investigation would find Bevilacqua and Krol successfully shielded from prosecution 63 priests who had sexually abused hundreds of children.

I never knew if Law had put up a fight to save our proposal or not. In one of our conversations he told me that internal politics in the bishops’ conference had a lot to do with the non-attention given by the conference leadership. At that time, Law was not one of the “in crowd” at the conference because his ecclesiastical political bent was much more conservative than the leadership.

Law’s brazen cover-up and his public downfall caused massive scandal to the U.S. church. In any normal organization, it would have meant the end of the line for him but this was the monarchical Catholic church, where up is often down and black is usually any other color but black.

After a few months, Pope John Paul II made Law the archpriest of the Basilica of Santa Maria Maggiore, which carried with it significant perks as well as a palace to live in. He remained an influential member of several Vatican congregations. This screamed volumes about the pope’s complete insensitivity to the incalculable harm done to the people of the Archdiocese of Boston but most importantly, the harm done to victims.

Many who thought the Vatican would do something began to learn just how out of touch the papacy and the Curia really were and how obsessed they were with their own welfare. This hasn’t changed in spite of the seemingly sympathetic rhetoric. All talk but no action, then and now.

Law’s life after Jan. 6, 2002, was no doubt marked by a good deal of personal pain, stress and bewilderment. He was the center of a phenomenon in Catholic life that was unheard of: the public disintegration of the life of a prince of the church culminating with his resignation and departure in disgrace.

In spite of the opprobrium heaped on him, his actions in Boston were far less blameworthy than several of his brother bishops: Cardinal Roger Mahony of Los Angeles, Cardinal Edward Egan of New York, Archbishop John Neinstedt of St. Paul-Minneapolis, Archbishop John Myers of Newark, New Jersey, Bishop Robert Finn of Kansas City, Missouri, to name but a few. These men and others not only engineered multiple cover-ups blanketed in lies, but in many instances, they “punished” victims for challenging the church in court by allowing and even encouraging their attorneys to attack, humiliate and eventually re-victimize them.

When Law finally realized his stature and his power had eroded, he asked Pope John Paul II to allow him to resign. Twice the pope refused, indicating his own blindness to the plight of the victims and faithful of the Boston archdiocese. The pope finally acceded in December 2002, and thus Law became the first and only American hierarch to resign because of his role in the clergy abuse scandal.

I’ll always wonder if Law fundamentally changed when he had to face sexual abuse by his own clergy right in his own back yard. It no longer was an impersonal problem far removed from his world. I wondered if his response in Boston was really a tragic manifestation of skewed loyalty to the hierarchy’s bizarre notion of the meaning of church.

Whatever is true is dwarfed by his impact on the unfolding sexual abuse phenomenon in the modern church. He is a tragic anti-hero because his actions as archbishop were the catalyst for fundamental and far-reaching changes in the Catholic clerical culture and in the victims’ and laity’s realization that their days as docile, silent sheep are forever dead.