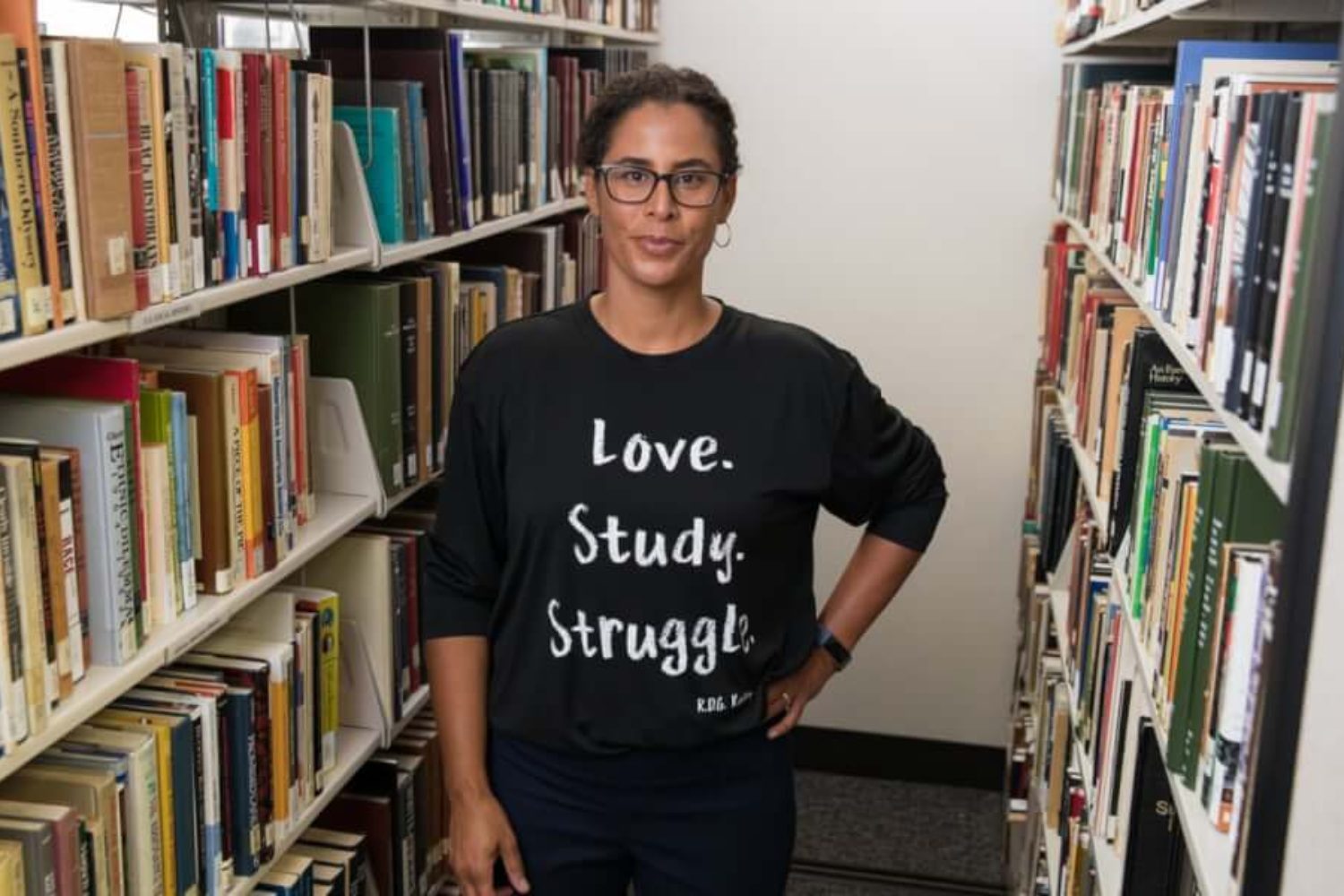 photo above: Kelly Lytle Hernández, who received the MacArthur ‘genius’ grant, views prison abolition through the eyes of rebels

In a revised forthcoming publication by Wipf and Stock Publishers, namely Volume One of Justice That Transforms, I write:

Longtime Restorative Justice promoter Howard Zehr once directly critiqued this author’s writings by telling me one does not attract bees with vinegar . . .

My longstanding commentary on the “bees” comment has been in accord with Ruth Morris’ watchword response to “Restorative Justice” as promulgated back then by Zehr and others of similar ilk: “Not Enough!” (See the essay by that title in Volume One on Amazon) Ruth’s vision was not at the time in line with Zehr’s, though he liked to imagine so: hers was far more trenchant and grand—and controversial!

Ruth would say, as do I, that a Restorative Justice out mainly to attract “bees” and primarily with honey—all sweetness and light— creates mainly a “B”-Grade Restorative Justice, one better than retributive justice to be sure, but seriously lacking in vigorous fulsome challenge to what Catholic Worker founder Dorothy Day repeatedly dubbed “the dirty rotten system,” of which Western criminal justice was a key component. To further play with words, Zehr’s preference then for “B-Grade” was in fact to “D-Grade” the revolutionary potential of what Restorative Justice promised; a preference perhaps residual function of his Mennonite heritage that privileged being die Stillen im Lande—the Quiet in the Land.  Western systems of justice have always been infected with brutal Empire/colonization and control/“pacification” motifs. In my retirement years, I have devoted a website (waynenorthey.com) to the Gospel as Counter-Narrative to Empire—the Ultimate Dirty Rotten System. There is much on the site in support of such a thesis.

One should not therefore be so much out trying to attract “B(-Grade)s,” one should instead be creatively challenging the very “WASPS” that run brutal justice systems . . . to as it were (for starters) repent, apologize,[ref =num”1″]Please see my “Call For a Church Apology Vis À Vis Crime and Punishment.”)) make amends, and “sin” no more! “WASP” in Canada is in fact an acronym for the “White, Anglo-Saxon, Protestant” Establishment—historically the very originators and guardians of such stingingly harmful systems throughout the colonized world. (Not that all working within such systems are necessarily directly caught up in their evil—though ineluctably tainted.)

What is needed, Amos (5:24), Dorothy Day, Ruth Morris, Martin Luther King Jr. and a host of prophetic saints thunderously call for, is rigorously radical transformation of that dirty rotten system! Zehr’s approach to Restorative Justice early on lacked the radical intellectual rigor the best of the Christian (and beyond—think Gandhi) prophetic tradition exhibits. What is wanted is for starters a “ . . . who-can-but-prophesy?—Amos” measured diatribe against the System, such as captured brilliantly in Canadian singer Bruce Cockburn’s “Lovers in a Dangerous Time”: gotta kick at the darkness ’til it bleeds daylight.

I have been committed to prison abolitionism for most of my 45-year criminal justice career. While it can be and is sugar-coated by euphemisms of “peace officers” and “Corrections”, its underlay is sheer state terror. In Canada, upper echelons give workshops around the world on our enlightened, successful, and humane prison system. They even believe in it. But for anyone on the receiving end, or working for decades with those recipients, the reality is various shades of brutality. Not that all actors are necessarily inhumane. But the system is brutal, plain and simple. Or, as Karl Menninger wrote long ago in The Crime of Punishment, the dominant crimes encountered in the criminal justice system are its own against their keep. And Nils Christie in Crime Control As Industry: Towards Gulags, Western Style echoed this in describing the very system of criminal justice to be the greatest danger to any liberal democracy. And writers such as Fyodo Dostoevsky, Bernard Shaw and Winston Churchill claimed, the true measure of any civilization is its treatment of prisoners. By that measure, Western democracies are found to be woefully wanting.

Much of this understanding is captured in “For Abolition: Prisons and Police Are More Than Brutality, They’re State Terror, with some commentary by me.

This too is the burden of this brilliant researcher’s work, highlighted below.

Kelly Lytle Hernández grew up seeing the effects of the immigration and law enforcement system first-hand. Her upbringing has driven her groundbreaking work as a historian, documenting the creation and expansion of border patrol and how Los Angeles came to operate the largest jail system in the world. Her most innovative project, Million Dollar Hoods, has mapped the nearly $1bn cost of incarcerating 17,000 people in LA.

The 45-year-old University of California, Los Angeles (UCLA), professor recently added “genius” to her résumé, as a recipient of the prestigious MacArthur Fellowship award. She’s working on a new book about a group of Mexican intellectuals and workers who launched a revolution when they came to the United States in the early 20th century, driven out of Mexico by the dictator Porfirio Díaz.

The activist scholar talked to the Guardian about challenging the field of history and what prison abolition means to her. The conversation has been condensed and edited for clarity.

You’ve talked about building a “rebel archive” to document the history of incarceration. What does that term mean to you?

A “rebel archive” includes the voices and the acts of the people who fought the rise of mass incarceration, the rebels themselves.

We are training a new generation of black, brown, indigenous, first-generation students in the field

What do you want people to take away from these maps and what have you  uncovered so far?

In some communities in Los Angeles, we’re spending over a million dollars per year locking up local residents and that is money we are throwing away. The vast majority of charges are drug possession and DUI. Those are public health crises. So when you see those neighborhoods light up in red, you know that is a community that needs to have a significant shift in how public resources are spent – away from policing, incarceration and into social and family support services.

It’s also the set of records that evaded police destruction across centuries. The LAPD and LA sheriff’s department run the jails of LA and have destroyed the vast majority of their records. I had to go and find whatever record did survive – in newspaper articles, legal battles, in songs that had been written by migrants about their experiences with incarceration, in photographs, in pamphlets, all these different places. The point was to look beyond traditional places, to hear the voices, to incorporate the lives of people who have been rebellious and marginalized.

What’s it going to take to have that shift on a large scale?

I think about this over the long arc of time – understanding that mass incarceration comes out of the colonization of the American west, the occupation of indigenous land, the end of enslavement. These are core problems around belonging and race in the United States.

There is no singular policy solution to the problem of mass incarceration, mass deportation, the carceral state. We need to have an extensive process of truth, reparation and reconciliation where the world of possibilities is opened anew for us. Right now, I don’t think we have the capacity to imagine the solution to the extraordinary problems. We need a mass public education campaign about the harms that have been done, the assets that have been stripped, the families and communities that have been strategically damaged and ripped apart across the arc of the American story.

What do you think are the biggest stories about the carceral system that the media is missing or that the public doesn’t understand?

We’ve done a wonderful job of bringing more attention to the crisis at the US-Mexico border and the children and families who are being locked up and impacted and locked out. I hope that we can also use this moment to talk about the children of the imprisoned, and the trauma that the loss of a parent can involve. I hope that we can build from this to consider all of these communities that have been so deeply impacted by the carceral state.

I also think it would be fantastic if every person in the United States would know whose land they are on, and the history of occupation, war, of relocation, of treaties, of broken treaties. If every person in the United States could have a sensibility of the history of the land that they occupy, I hope that would open up new opportunities for our conversation about racial justice.

What does it mean for the MacArthur Foundation to honor someone like you who is an “activist historian” or “movement-driven scholar”?

The academy has taken great strides in acknowledging and valuing socially engaged, movement-driven work. But there’s a lot more work to be done to actually seed and sustain this kind of work, which is rigorous and scholarly, deeply archival, grounded in the literature – and is also responsive to concerns and demands of contemporary social movements.

When I wrote my first book, Migra! A History of the US Border Patrol, many scholars doubted me and questioned why I wrote this as a story of race in America. Growing up on the US-Mexico border, it never dawned on me there was another way to tell this story. But the academy wasn’t there yet, they were stuck on questions of immigrant incorporation and Americanization. But my own experience was telling me something different.