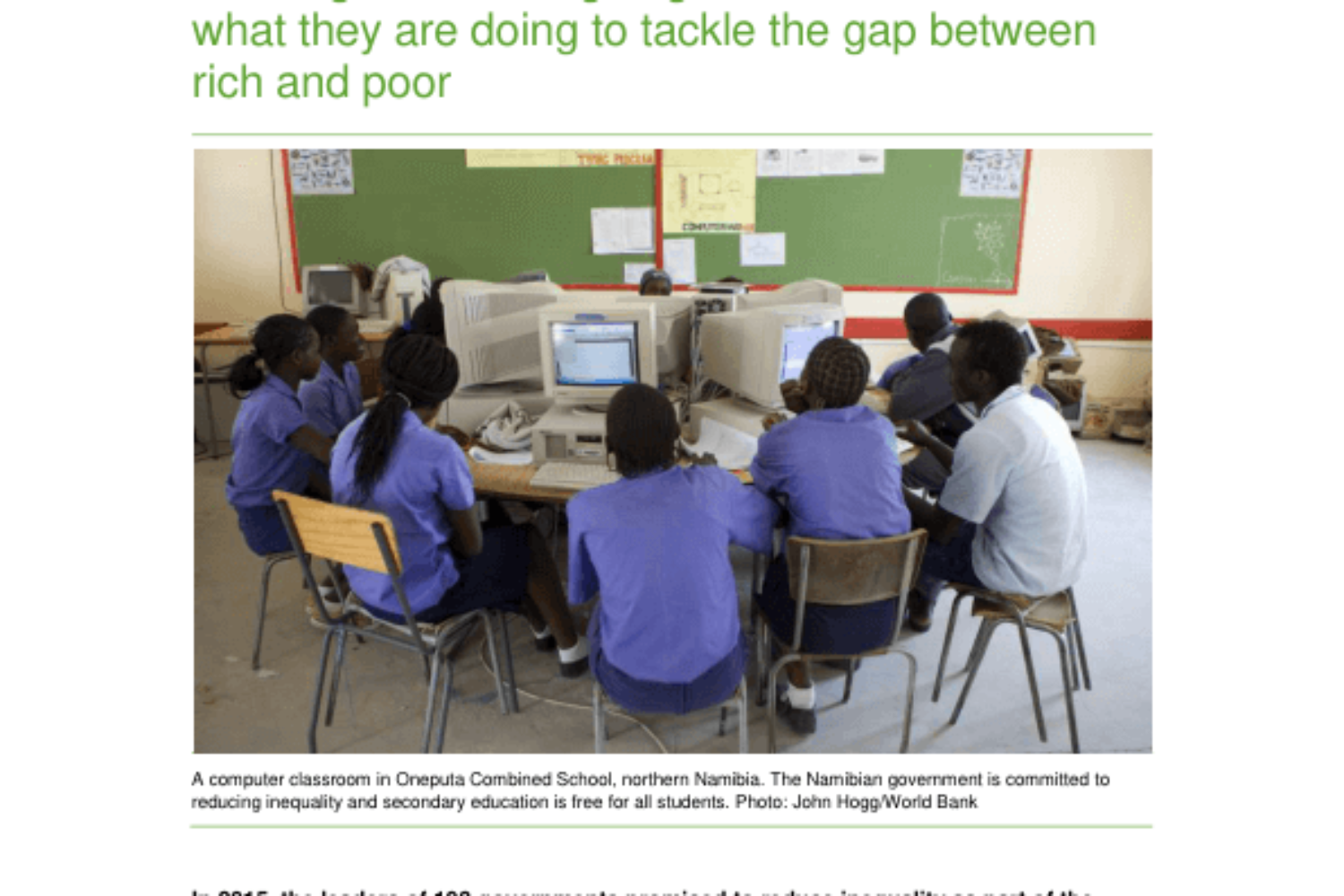 Now listen, you rich people, weep and wail because of the misery that is coming on you. 2 Your wealth has rotted, and moths have eaten your clothes. 3 Your gold and silver are corroded. Their corrosion will testify against you and eat your flesh like fire. You have hoarded wealth in the last days. 4 Look! The wages you failed to pay the workers who mowed your fields are crying out against you. The cries of the harvesters have reached the ears of the Lord Almighty. 5 You have lived on earth in luxury and self-indulgence. You have fattened yourselves in the day of slaughter.6 You have condemned and murdered the innocent one, who was not opposing you.

A great study on this, published by John Alexander in 1986 is: Your Money or Your Life: A New Look at Jesus’ View of Wealth and Power.

Two years ago, in 2015, just about all the nations in the world came together and agreed to make reducing inequality — the gap between rich and poor — a prime United Nations “sustainable development goal.”

A noble gesture. But UN groups make noble gestures all the time. These gestures do sometimes translate into real progress. They more typically amount to blowing smoke — and obscuring how little progress governments may actually be making.

How can we tell which nations are just blowing that smoke? People worldwide clearly need a yardstick that identifies those nations, a global measure that can help average citizens hold their governments accountable to all their noble rhetoric. On inequality, we now have that measure.

Oxfam, the activist global charity, has just teamed with the Development Finance International consulting group to unveil the first-ever Commitment to Reducing Inequality Index, “a new global ranking of governments based on what they are doing to tackle the gap between rich and poor.”

We already know, researchers at Oxfam and DFI point out, what governments should be doing to reduce the gap between rich and poor. We have “widespread evidence” that “strong positive progressive actions by governments” in three particular spheres can narrow that gap.

The three spheres? Progress against inequality starts with significant social spending on education, health, and other public services. To fund these services — and keep power from concentrating — nations serious about reducing inequality also seriously tax their rich and the corporations they run.

Reducing inequality demands an equally significant commitment to ensuring that working people have enough bargaining power, in both the workplace and the political process, to demand and win decent wages and economic security.

The new Commitment to Reducing Inequality Index measures progress in these three spheres for the 152 nations of the world that have adequate data available. Those nations that have collected little relevant data, Oxfam and Development Finance International note, haven’t demonstrated much of a commitment to reducing inequality.

Neither have some of the nations that do have data available. Nigeria, for instance, ranks dead last on the first Commitment to Reducing Inequality Index. The nation has about the same per capita annual income as Bolivia. Yet 10 percent of Nigerian children die before age five. The child death rate in Bolivia: less than half that, only 4 percent.

Also lagging in the struggle against inequality: India and Pakistan. Along with Nigeria, these middle-income nations, observe Oxfam and DFI, “could be spending far more on health, education, and social protection than they are.” With a combined population of 1.6 billion, the three “could make an enormous impact on reducing global poverty and inequality if they chose to.”

The laggard among the world’s rich nations? No contest there: the United States. The “wealthiest country in the history of the world” — the Oxfam and DFI label — has the highest level of inequality among the world’s major industrial nations. And the U.S. government is letting that inequality get worse — on every major front.

The actual tax rate on U.S. corporate income, for instance, runs just 14 percent, well below the statutory rate of 35 percent. U.S. workers, meanwhile, need $10.60 an hour to keep a family of four above the poverty line. The federal minimum wage guarantees just $7.25 an hour. And labor rights in the United States remain minimal, by developed world standards. Trade union representation has dropped by half, down to just over 10 percent, since 1983.

But Oxfam and Development Finance International go to great pains not to pick on the United States. They’re emphasizing that “no country is doing particularly well” in the struggle against inequality. Even the Scandinavian nations that rank at the top of the new index “have room for improvement.”

Many of the nations that currently rank among the world’s most equal, Oxfam and DFI go on to note, are “trading on past glories.” Denmark, to give one example, scores well on progressive taxation, social spending, and worker protection. Recent Danish governments have “focused on reversing all three.”

The rich and their enterprises — “in rich as well as poor countries” — could be paying “much more tax,” the new Oxfam and DFI ranking study adds, supplying revenues that could be “used to invest in measures that are proven to reduce inequality.

“Overall,” the new ranking study notes, “two-thirds of the 152 countries in the Index are collecting less than one-quarter of the tax they could potentially collect.”