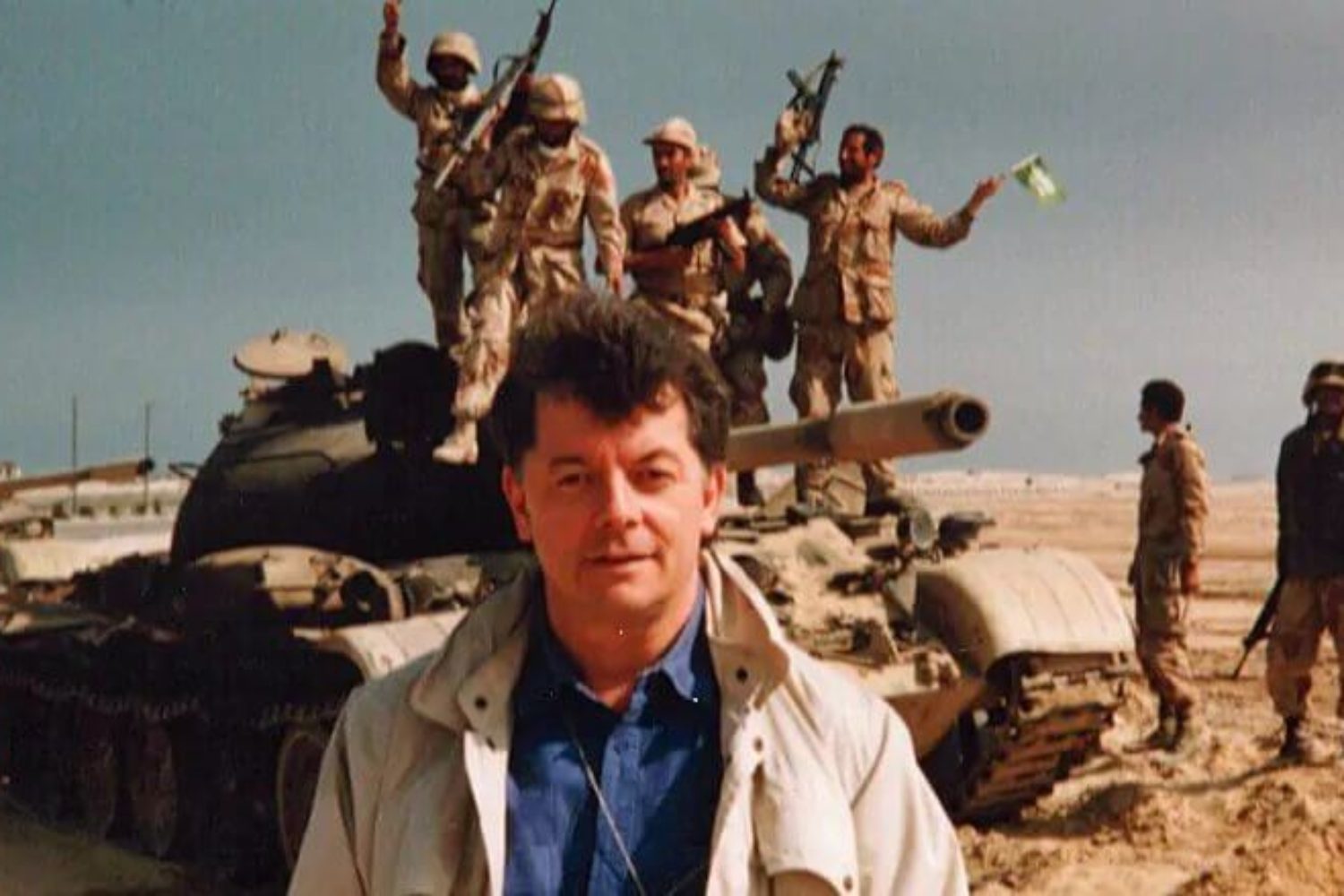 WN: Brian Stewart is a well-known Canadian journalist who a dozen or so years ago found his way to Christian faith. The piece here was a Convocation address to a bunch of Presbyterian seminary graduates.

I showed this piece to a friend who long since, though raised a Christian, disavowed the Church as an evil institution throughout history. While I certainly have sympathy for the view that the Church in Jesus’ name has done indeed much evil (my novel highlighted elsewhere on the website attests to that), thank God that is not the only story! This address speaks brilliantly to that. My friend remains doggedly anti-Church. There are none so blind as those…

For further reflection in this vein see: Easter Song. Wilful ignorance ever dogs the human condition to which no one is at times exempt. Sigh…

photo above: A younger Brian Stewart, in the desert outside Kuwait City

For many years I’ve been struck by the rather blithe notion, spread in many circles including the media, and taken up by a rather large section of our younger population, that organized, Mainstream Christianity has been reduced to a musty, dimly lit Backwater of contemporary life, a fading force. Well, I’m here to tell you from what I’ve seen from my “ring-side seat” at events over decades that there is nothing that is further from the truth. That notion is a serious distortion of reality. I’ve found there is NO movement, or force, closer to the raw truth of war, famines, crises, and the vast human predicament, than organized Christianity in Action. And there is no alliance more determined and dogged in action than church workers, ordained and lay members, when mobilized for a common good. It is these Christians who are right “On the Front Lines” of committed humanity today and when I want to find that Front, I follow their trail.

It is a vast Front stretching from the most impoverished reaches of the Developing world to the hectic struggle to preserve caring values in our own towns and cities. I have never been able to reach these Front lines without finding Christian volunteers already in the thick of it, mobilizing congregations that care, and being a faithful witness to truth, the primary light in the darkness and so often, the only light.

Now this is something the media and government officials rarely acknowledge, for religion confuses many, and anyway, we all like to blow our own horns. So Front Line efforts of Christianity do not usually produce headlines, and unfortunately this feeds the myth that the Church just follows along, to do its modest bit. Let me repeat, I’ve never reached a war zone, or famine group or crisis anywhere where some Church organization was not there long before me…sturdy, remarkable souls usually too kind to ask “what took you so long?”

I don’t slight any of the hard work done by other religions or those wonderful secular NGO’s I’ve dealt with so much over the years. They work closely with church efforts, they are noble allies. But no, so often in desperate areas it is Christian groups there first, that labor heroically during the crisis and continue on long after all the media, and the visiting celebrities have left.