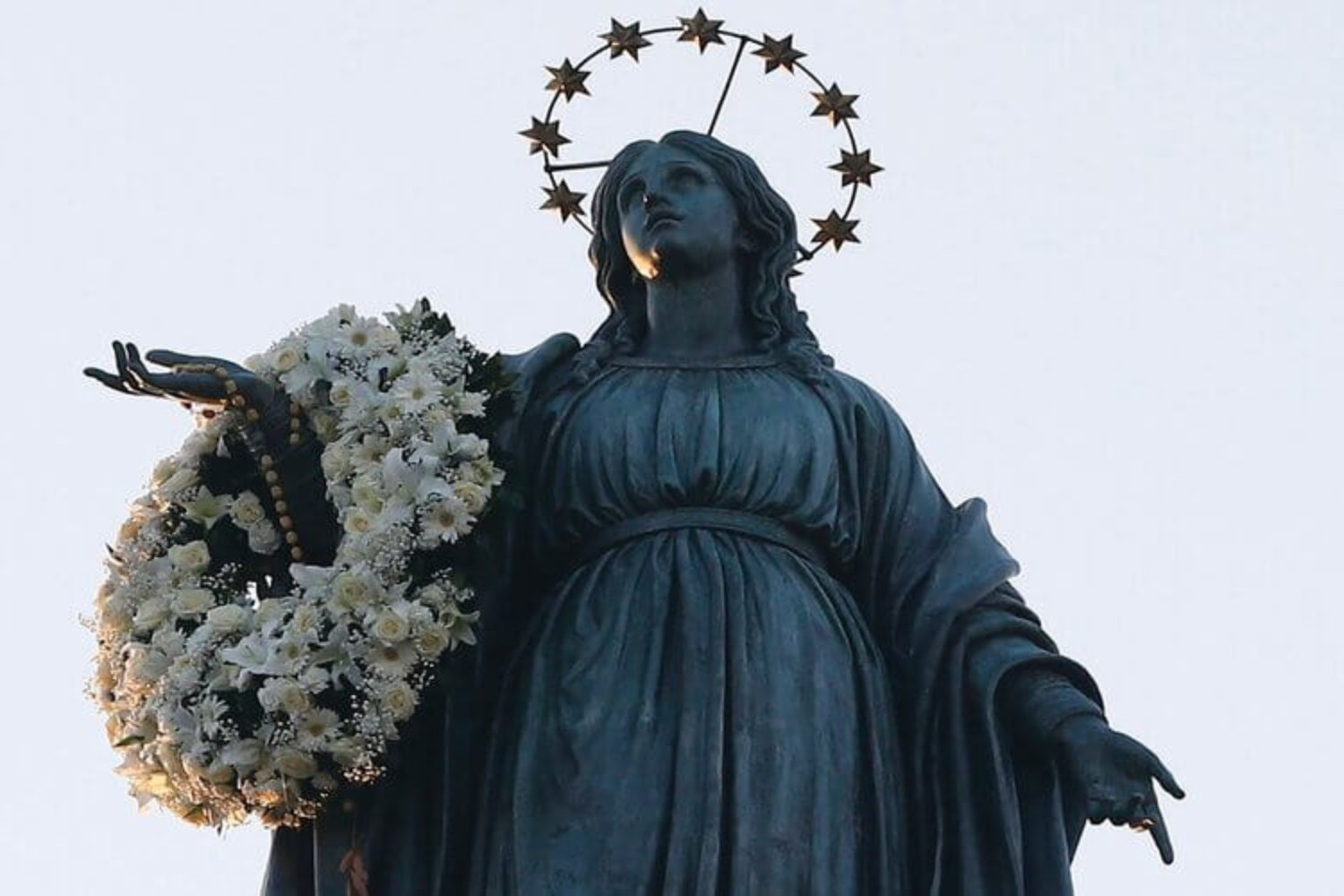 Mary Szybist is a poet, professor and the author of Incarnadine, winner of the 2013 National Book Award for Poetry. She is the 2019 laureate of the George W. Hunt, S.J., Prize for Journalism, Arts and Letters, which is co-sponsored by America: The Jesuit Review.

WN: Though my tradition was sadly not grounded in Mary veneration, and therefore I’m very much an outsider, the poet’s ruminations beautifully touch on perennial themes of the human condition. She begins with an enigmatic poem.

Hail Mary who mattered to me, gone or asleep
among fruits, spilled
in ash, in dust, I did not
leave you. Even now I can’t keep from
composing you, limbs & blue cloak
& soft hands. I sleep to the sound
of your name, I say there is no Mary
except the word Mary, no trace
on the dust of my pillowslip. I only
dream of your ankles brushed by dark violets,
of honeybees above you
murmuring into a crown. Antique queen,
the night dreams on: here are the pears
I have washed for you, here the heavy-winged doves,
asleep by the hyacinths. Here I am,
having bathed carefully in the syllables
of your name, in the air and the sea of them, the sharp scent
of their sea foam. What is the matter with me?
Mary, what word, what dust
can I look behind? I carried you a long way
into my mirror, believing you would carry me
back out. Mary, I am still
for you, I am still a numbness for you.

Growing up with the name Mary was not, for me, an experience charged with possibility. I didn’t so much feel like a Mary as I did a failure of Mary. Despite your many titles (Our Lady of Sorrows, Our Lady of the Sea) you floated in my mind as a singularity. My images of you were so similar they were not distinguishable. I knew there was more than one Mary in the Bible, but you were the one who was held up to me, the one who haunted me—you, the Mary, immaculate Mary. I felt like a tragic falling-off.

It’s true I imagined you as silent, as beautiful and beloved, and those qualities, through the habit of thinking of you, became related to each other. Maybe I still half-believe I must be quiet to be loved. I think of this sometimes, trying to cajole young women into class discussions. They still don’t speak out loud in my classroom in proportions even close to their male peers.

Lately, when I close my eyes at night and try to give myself over to dreams, voices turn in my mind and accuse me: “You just want to re-make the church in your own image,” they say.

But, Mary, who doesn’t do that?

And who does and doesn’t get to do that?

It was when I wandered into the Bible’s wilderness and read it for myself that I began to do more than picture you. To find you among the Bible’s juxtapositions, inside its bravado in placing different accounts side by side without any attempt to reconcile them, was to imagine you as a figure who could leap. To find you among the audacity of its collages was to feel you less tethered to your gauzy image on my mother’s holy cards.

Still, your scenes in the Bible seem strangely singular, isolated. They don’t proliferate, like other stories, in multiple versions, multiple Gospels. The Annunciation and the Visitation are told just once, and briefly, in the Gospel of Luke.

And so it doesn’t seem strange to me, my desire to write you, to re-write you, to magnify you and your scenes, to amplify them, to find more possibilities in them.

To rage in quiet. To grieve in quiet. I worry that my deepest inclinations are for quiet.

I love the possibility that the Bible may have been assembled as a grand peace-making gesture, an attempt to bring together communities at war by assembling a single book inclusive of all the different ways they tell the same stories. I love how the Bible’s stories are not smoothly blended but co-exist side by side. And I love, Mary, that your presence is part of it, that your speaking is essential to it. He will fill the hungry with good things. The rich he will send away empty. Before I read the Bible, I hardly thought of you as someone who spoke.

Don’t we celebrate you, Mary, for making a choice? For saying yes—yes to being a co-maker with God?

Don’t we imitate you when we co-create life—biological, artistic, relational, communal? And when we care for that life?

Don’t we imitate you when we use the imagery and language that the dead have cursed and gifted us with to participate in the creation of meaning?

I like how Ada Limon says it: “I, for one, have never made anything alone, never written a single poem alone. We write with all the good ghosts in our corners.”

At Chartres, there is a fragment of veil that looks like it would fall through my hands if I touched it. Kept in the cathedral behind bulletproof glass, it is disintegrating quietly. It is said to be your veil.

I’ve watched tour guides stand next to it and repeat its legend: how, in the spring of the year of our Lord 911, when Chartres was surrounded by Vikings, the Bishop saved the city by holding your veil high up from the tallest tower—

How it terrified. How that Viking army understood, and turned back.

I imagine your empty veil waving almost imperceptibly above the city, its gauzy colors nearly indistinguishable from an overcast sky.

Samuel Beckett called language a veil in which he wanted to “bore one hole after another…until what lurks behind it—be it something or nothing—begins to seep through.”

But when I write a poem, it is not to bore holes. It is not to use language for the hush work of cover. It is to take that veil from its stillness and shake it—to hold it among wind gusts, to wave it from the high windows—

It is not surrender.

Mary Szybist, “Hail” from Incarnadine. Copyright © 2012 by Mary Szybist. Reprinted with the permission of The Permissions Company, LLC on behalf of Graywolf Press, Minneapolis, Minn. www.graywolfpress.org.