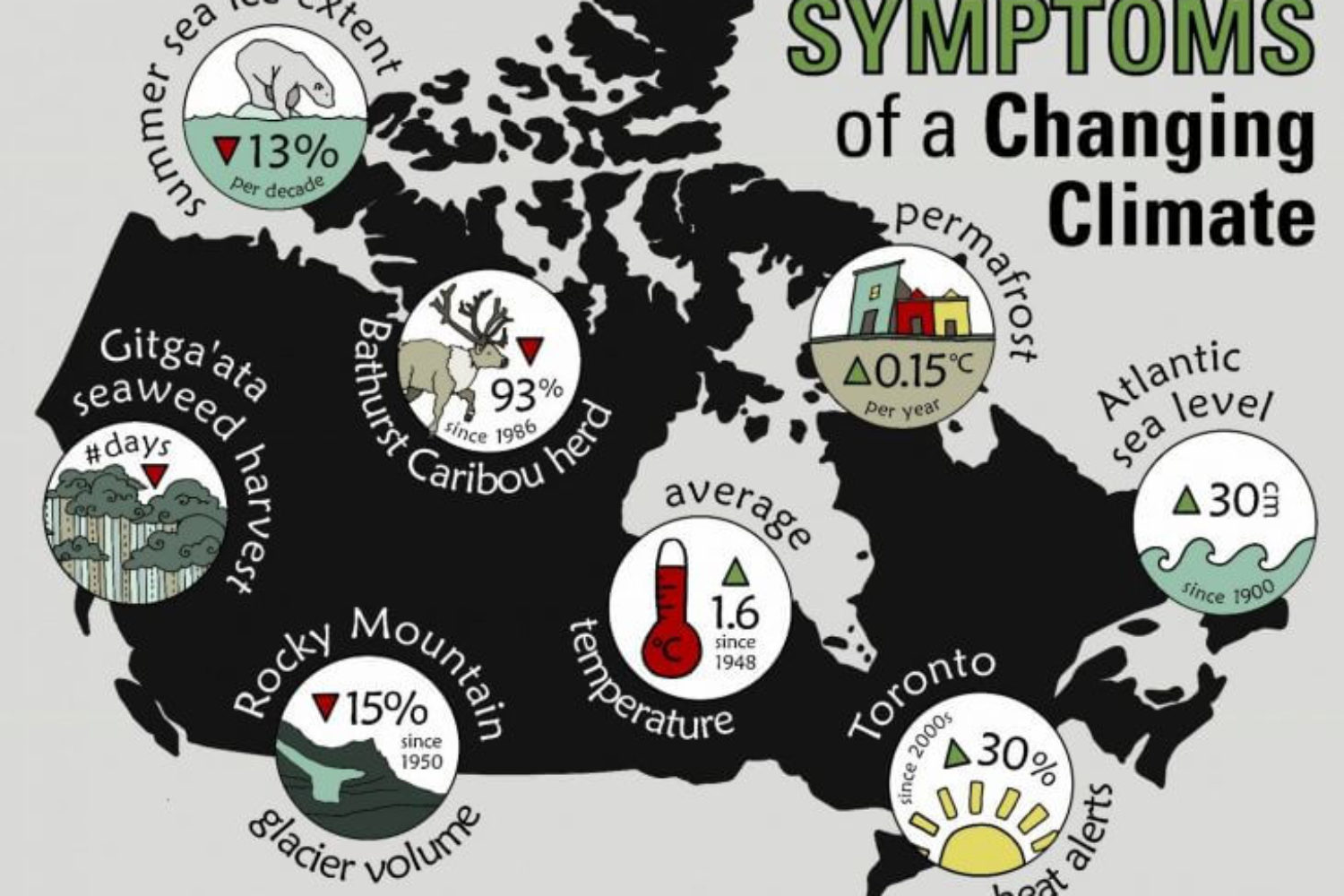 The effects of climate change are seen and felt around the world. These are the big signals that the changes in global temperatures are impacting the balance of the Earth’s systems: floods and droughts; extreme storms and rising seas level; and melting glaciers and ocean acidification.

Like an aching body and a pounding head indicate a fever, these ‘symptoms’ tell us that the natural balance of our climate is out of whack.

Like the rest of the planet, temperatures in Canada are rising. Since 1948, the average annual temperature of Canada has increased by 1.6°C. Regionally, this trend is strongest in the central arctic where a warming of 2.6°C has been observed in the same time period.

The average winter temperature has increased even more drastically, with temperatures in the winter of 2015-2016 4°C above the baseline average, indicating a warming of 3.3°C since 1948.

The interconnected nature of the Earth’s climate means that an overall increase in average temperature is both a symptom and a cause of climate change impacts.

Although climate change does not always result in hotter temperatures specifically, it has been linked to more extremes in weather. This is evident in Toronto where the average number of annual heat alerts issued between 2010-2016 has increase by 30% over 2001-2009.

More heat alerts mean more health risks, especially for those most vulnerable such as children and seniors. Heat alerts are also being issued in many smaller southern Ontario cities, and are becoming more common in places like Montreal, Calgary, and Vancouver.

The Canadian North is particularly impacted by a warming climate. Permafrost in Nunavut has been warming at a rate of 0.15°C a year. This permanently frozen ground is the base condition for ecosystems, and it also supports the current infrastructure of the high arctic in northern Canada.

As permafrost thaws the depth of unfrozen ground on the surface increases, changing nutrient and root depth conditions. This alters which plant species can grow and survive, and, by extension, impacts animal life. The thaw also means softer ground, resulting in eroding coastlines and cliff faces, and destabilized infrastructure. Ultimately, this warming trend will greatly impact human and ecological communities.

On Canada’s northern coast, the extent of the summer sea ice has been shrinking at a rate of 13% per decade. This is mostly due to earlier, more extensive melting in the spring and increasingly later freezing in the fall. If current trends continue as expected, summer sea ice is predicted to disappear completely by the summer of 2050.

For polar bears, this means less time for hunting, which weakens them physically and makes them more vulnerable to species endangerment.

Declining sea ice over time also means more of the water previously stored in sea ice is melting into the oceans and contributing to rising global sea level.

It’s not just polar bears. The population of the Bathurst Caribou herd in the central arctic has dropped 93% in just 30 years. This incredible reduction in population is attributed to the change in synchronization of plant and animal life cycles and increased weather extremes of their natural habitat.

Adult caribou aren’t getting enough to eat. And since the birthing season no longer lines up with prime vegetation periods, the lack of available food reduces the chances of young calves surviving to adulthood.

Scientific records show that the glaciers in the Rocky Mountains have shrunk by 15% since the 1950s. This is a pressing concern for both the ecosystems dependent on glacial water to flourish and fresh water resources in western Canada where a significant portion of the population depends on glacier run-off for municipal water supplies, irrigation, and hydropower.

Along with sea ice and other ice pack water sources, the melting of stored glacial water adds water to the oceans, contributing to rising sea levels.

The East Coast is the region of Canada most severely threatened by rising sea levels. Over the last century, Atlantic Canada has seen a rise of 30cm, causing more frequent storms and higher storm surges.

This pairing of effects causes increased flooding and erosion of the coastline and beaches which disrupts human and ecological communities.

On the West Coast, climate chance is affecting the ability of the Gitga’ata First Nation to practice their traditional ways of life. Changing wind and seasonal weather patterns since the 1990s are causing colder and wetter spring seasons.

Fewer dry, sunny days makes it difficult for the Gitga’ata to harvest and preserve staple traditional marine foods, especially seaweed, which they cure by drying it in the sun. It is becoming harder and harder for them to maintain their traditional diets. This impacts their ability to retain the cultural and health significance of these practices.

These examples of climate change impacts in Canada highlight the interconnectedness of this growing issue. Seemingly small changes in global or national temperatures cause significant changes on a local level. They alter the local ecology, and harm the livelihoods, homes, food systems, and health of Canadians.

Just as these symptoms represent a larger issue around the globe, solutions must come from a far-reaching joint effort to address the root cause of climate change.

The Government of Canada is set to announce a national climate action plan later this fall. For the wellbeing of all Canadians, let’s hope that it goes far enough.