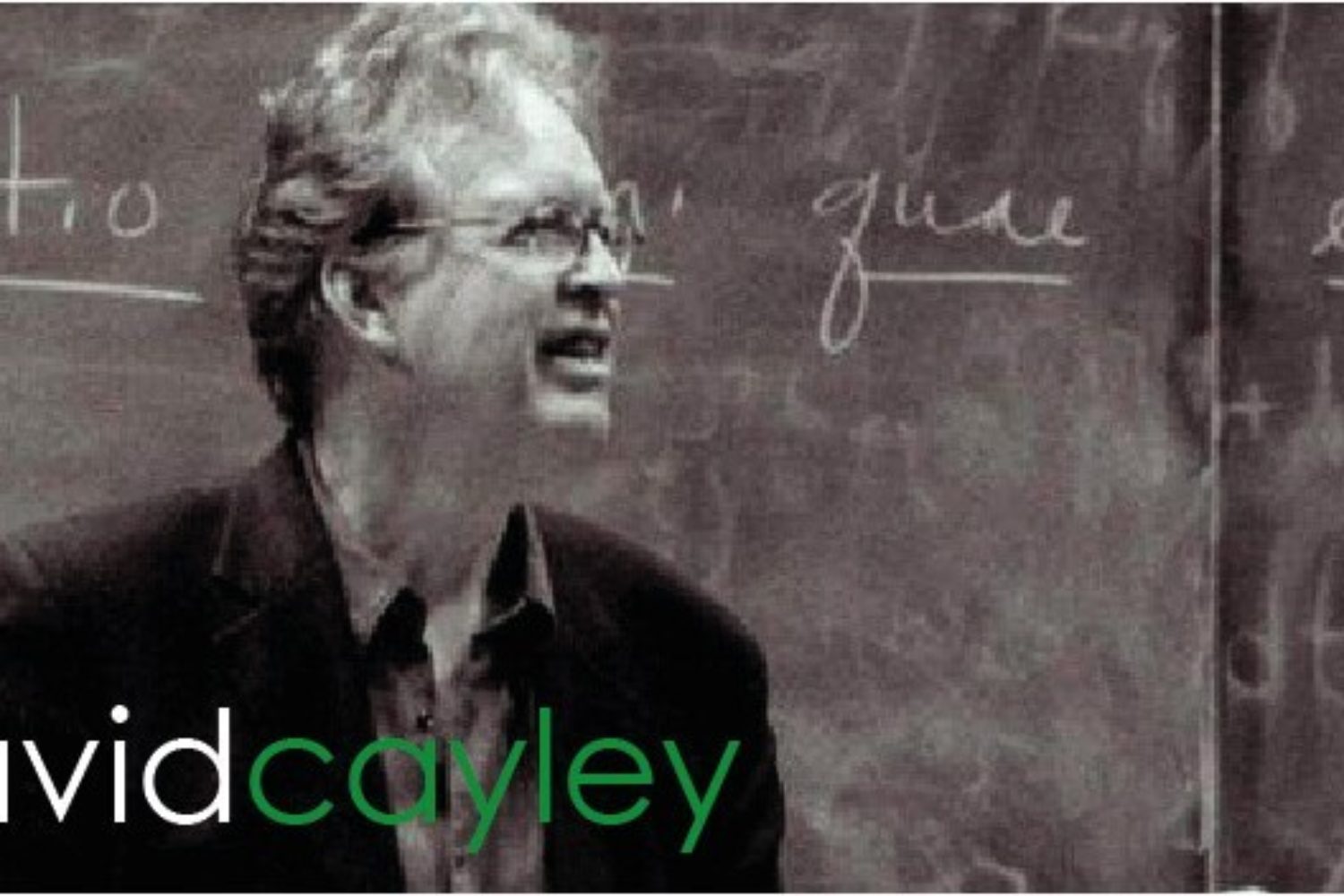 WN: This is a highly instructive essay. There is much on my website about David Cayley’s writings. Please see as well his masterful and massive book on Ivan Illich: Ivan Illich: An Intellectual Journey.

This article was written for The Palgrave Handbook of Mimetic Theory and Religion [that only libraries can afford!], a handbook on the work of René Girard edited by James Alison and Wolfgang Palaver published in 2017. Wolfgang, a friend, asked me to “build a bridge” between Illich and Girard.  The 3,000 word limit the editors imposed was a challenge, and I’m not sure the bridge is safe to walk on yet,  but here at least is a sketch:

The figure of Anti-Christ carries a lot of colorful, historical baggage.  Building on fairly slight New Testament evidence, the legend of an Anti-Christ whose appearance will initiate the last battle begins to grow in early Christian times.  By the second century Irenaeus can specify the length of time for which he will reign before Christ’s return – he puts it at three and a half years.  Hippolytus, a little later, knows that the Deceiver will resemble Christ in every particular.  By the fifth century certain familiar kitsch elements have begun to enter the Anti-Christ’s appearance, as in this description from the apocryphal Apocalypse of the Holy Theologian John:

The appearance of his face is gloomy; his hair like the points of arrows; his brow rough; his right eye like the morning star, and the left like a lion’s.  His mouth is a cubit wide, his teeth a span in length, his fingers are like sickles.  His footprints are two cubits long, and on his forehead is the writing “The Anti-Christ.”[i]

In modern times, Anti-Christ has faded from awareness.  Despite the persistence of the idea at the fringes of American Protestantism, the historian and theologian Bernard McGinn seems broadly correct when he asserts, in his history of the Anti-Christ legend, that “the last Enemy rapidly became the hobby of cranks after 1660.”[iii]  McGinn does acknowledge a couple of exceptions: Vladimir Solovyev, the late nineteenth century Russian theologian, poet, and pamphleteer; and psychologist C.G. Jung.  But these were “the last major Western thinkers,” McGinn wrote in 1994, “who were convinced that real consideration of the problem of evil necessarily involves Anti-Christ.”[iv]   His judgment may have been premature.  In my view, Ivan Illich and René Girard are both major thinkers of our time; and both, in full awareness of the turbid waters into which they were wading, have revived and repurposed the figure of Anti-Christ.  In what follows I will try to summarize each of their views and then compare them.

Ivan Illich was a Roman Catholic priest, who lived from 1926 to 2002.  In 1969, he withdrew from all church office after inquisitorial proceedings were begun against him in Rome.[v]  His remaining reputation largely rests on books he wrote in the 1970’s, notably Deschooling Society and Medical Nemesis, in which he argues that institutions like education and medicine have become counterproductive monopolies that defeat their own purposes, smother personal responsibility and frustrate popular initiative.   Late in his life, at my initiative, he agreed to share his thoughts on how the institutionalization of Christianity has shaped the modern civilization that grew out of Latin Christendom.  I had been intrigued by his saying to me at the end of a long interview in 1988 that “Western culture” could only be fully accounted for by recognizing it as a corruption of the New Testament.  He used the old Latin adage corruptio optimi pessima – the corruption of the best is the worst.  He had recently expressed the same idea in a lecture at the McCormick Theological Seminary in Chicago:

I want to explore with you a phenomenon that I consider constitutive of the West, of that West which has shaped me, body and soul, flesh and blood.  This central reality of the West is marvelously expressed in the old Latin phrase: Corruptio optimi quae est pessima – the historical progression in which God’s Incarnation is turned topsy-turvy, inside out.  I want to speak of the mysterious darkness that envelops our world, the demonic night paradoxically resulting from the world’s equally mysterious vocation to glory.[vi]

Freedom, for Illich, is the keynote of the New Testament.  But freedom is also what gives the New Testament its unique volatility, its liability to corruption once its institutionalization is attempted.  “And that was what began to happen,” Illich argues, “after the Church achieved official status within the Roman Empire.

There is a temptation to try to manage and, eventually, to legislate this new love, to create an institution that will guarantee it, insure it, and protect it by criminalizing its opposite.  So, along with this new ability to give freely of oneself has appeared the possibility of exercising an entirely new kind of power, the power of those who organize Christianity and use this vocation to claim their superiority as social institutions.  This power is claimed first by the Church and later by the many secular institutions stamped from its mold.  Wherever I look for the roots of modernity, I find them in the attempts of the churches to institutionalize, legitimize, and manage Christian vocation.[xvi]

This, in a nutshell, is Illich’s hypothesis.  A love which is pure gift – unmerited, unconstrained, inconceivable – becomes an entirely new kind of law and a new kind of power.  And the process is progressive.  It begins when the Church becomes the welfare department of the crumbling Roman Empire.  It continues in the high Middle Ages when the “criminalization of sin” turns the Church into a law-governed prototype of the modern state.  And it culminates in our time in the creation of a vast architecture of secular service institutions.

So, to summarize, Illich believes that the Incarnation is something that manifests interpersonally, between persons.  It’s a gift that becomes “most fully visible at the moment of its rejection” – on the Cross – but once this gift is claimed as a source of power and an object of administration, the dominion of anti-Christ begins steadily to grow, achieving its mature form in modernity and something approaching its full articulation in our time. [xxi]  History, therefore, follows an apocalyptic logic – not apocalyptic in the sense in which the word is now used colloquially to refer to catastrophes of all kinds but in the word’s original sense of revelation or uncovering.  History tends to the fuller and fuller revelation of the mystery of evil.  This result, in its material manifestations, is visible to all and can be studied by the historian.  Many understand it as progress; others feel its uncanniness without quite knowing why.  Only the eye of faith can recognize it as sin and a mystery of evil by which the best becomes the worst.  The ability to disguise sin defines Anti-Christ.

All this, I think, fundamentally agrees with Girard’s view, even though each thinker emphasizes a different aspect of the Incarnation.  For Girard, the Cross proclaims the innocence of the victim and, in doing so, disables the mechanism by which all cultures had previously maintained peace – the unanimous murder of a victim whose death restores order and so reveals the victim as a god.  Sacrifices and prohibitions instituted in the name of this victim/god are the substance, according to Girard, of all archaic religions.  But this mechanism is gradually demystified in the Hebrew scriptures and then decisively unveiled in the New Testament, when God himself becomes the sacrifice – the last sacrifice because Christ’s voluntary and blameless submission exposes the terrifying trick by which Satan had formerly kept the peace and maintained his kingdom by allowing communities to disown, project and contain their own violence.  This exposure initiates the apocalyptic logic that history will follow wherever the Gospel is introduced.  Deprived of effective sacrifices, people face a choice: accept what Jesus calls the kingdom of heaven as the inspiration for their earthly existence or try to restore the effectiveness of sacrifice by ramping up the number of victims.  In the book of Deuteronomy, God had already said, through the mouth of Moses, “I have set before you life and death.  Therefore, choose life.”[xxii]  The Crucifixion and Resurrection impose this choice on “all nations,” though this will not finally become clear until Christianity gives birth to a world-wide civilization.   “The apocalypse has begun,” Girard says, as soon as this turning point is reached.  He described this new situation bluntly in an interview with me: