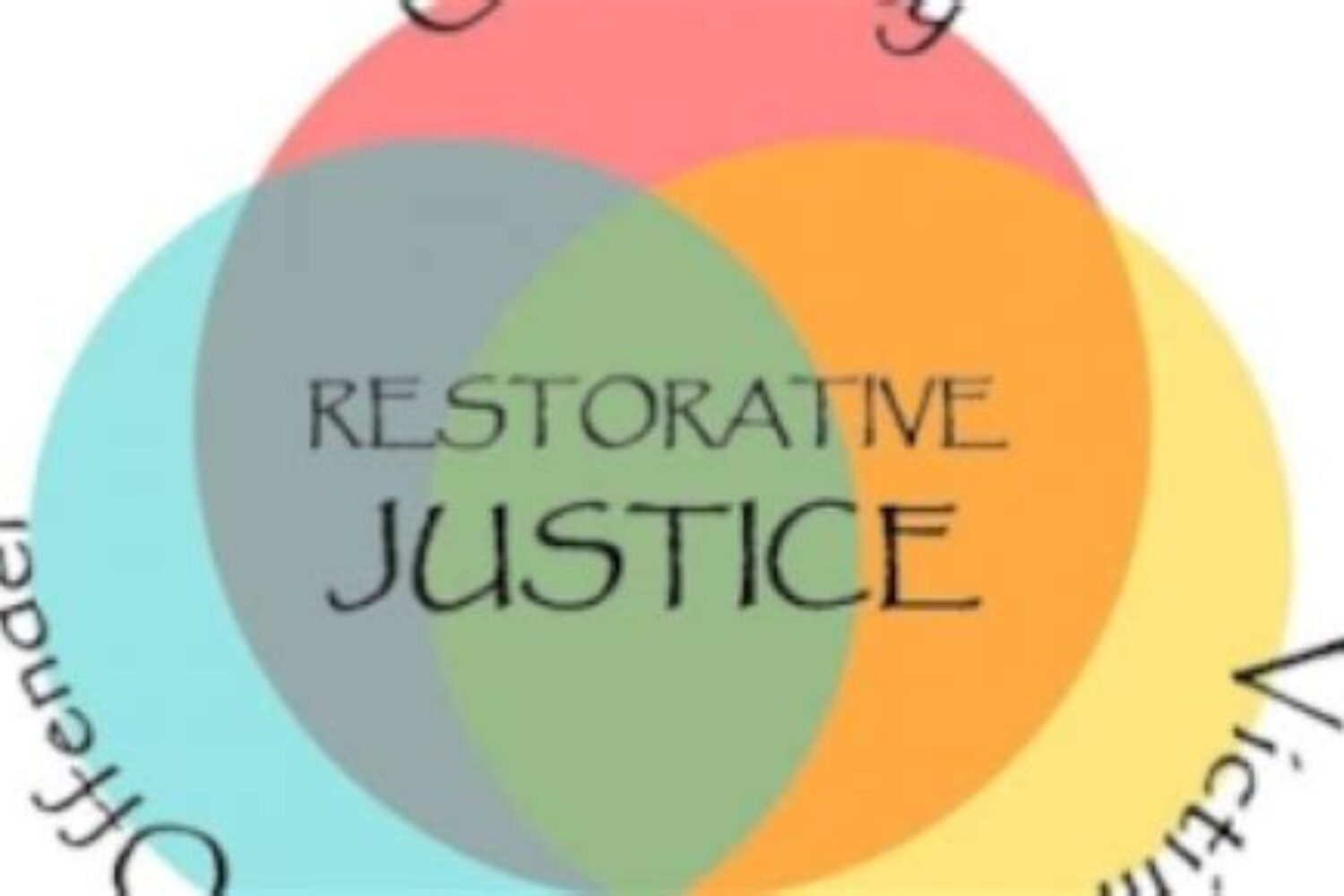 WN: Some of the papers on Restorative Justice are understandably repetitive, though I culling the obviously such.

In 1974 two youths who had been drinking and had been “talked to” by the police already, took out their frustrations on the small community of Elmira, Ontario, by doing damage to twenty–two different vehicles and homes. Several months later the youths pleaded guilty to the charges, and Judge Gordon McConnell in Kitchener ordered a Pre–Sentence Report. Mark Yantzi, the Mennonite Probation Officer writing up the report, discussed the case with the local Mennonite Central Committee court volunteer, Dave Worth. Both had been reading recent publications by the Law Reform Commission of Canada in which it had been stated that reconciliation played an important role in criminal justice. They also knew that reconciliation was the central concept of their Christian faith.

Yantzi proposed in his Pre-Sentence Report that the youths would benefit from meeting face–to–face with their victims and making amends. Judge McConnell was intrigued by the idea, and discussed it with the probation officer. The Judge indicated that the notion had lots of merit, but it was simply not done in Western jurisprudence. He made a fateful choice nonetheless when he decided “Why not?,” and put the sentencing over until Yantzi and Worth could take the youths to meet each of the victims.

They did and out of that experience arose the first ever “Victim Offender Reconciliation Project (VORP).”

The above story, the 30th anniversary of which was celebrated this summer, known in the Restorative Justice movement as “The Elmira Case”1 became a kind of proverbial shot that echoed around the world. Over 200 mediation programs in North America alone trace their origins to the program that came into existence as a joint venture between Ontario Correctional Services and the Mennonite Central Committee. Several hundred similar programs now exist in Europe and elsewhere.

A Little Bit of History 2

To set a context for the programmatic emergence of Restorative Justice late in the twentieth century some historical comments would be helpful.

Almost a millennium ago, in the late 11th century, European history underwent a significant upheaval some call “The Papal Revolution”. During this time, the Church moved to consolidate its power over all souls and kings of Europe, the great universities began to emerge, and the Western legal tradition started to take shape, as new law codes were formulated for study and promulgation throughout the Western world.

In a fateful interplay between Church and Society far too complex to describe in a short article, secular states began to follow the lead of how the Church dealt with its religious heretics. These “social heretics” began to emerge under new state law codes as “criminals” whose victims were no longer the actual victims, but “Rex” or “Regina”, or later “We the People” under the United States Constitution.So the evolution of the criminal justice system in the West was away from community and victim centred justice towards state and offender centred justice. The former had been a dominant approach in the ancient Hebrew culture, in Roman society when applied to its own citizens, and in many pre–colonial African, North American and worldwide indigenous cultures. In the Reconstruction of Japan following World War II, the Japanese became the first industrialized country nationally to embrace this more restoratively oriented way of justice3

There was previous dominant Western religious undergirding of this non–restorative approach which led to a marriage of law and religion that placed, on the one hand, primary emphasis upon the offender’s violation of the law while dropping any concern for rehabilitation of the victim. On the other hand, it drew on Roman slave law as a model for meting out the worst of punishments imaginable upon the offender.4 This form of response to crime is known as “retributive justice”, and has dominated Western jurisprudence for a millennium.

A few years ago, at a VOMA (Victim Offender Mediation Association) conference in Des Moines, Iowa, I saw a plaintive note on a bulletin board:

DOES ANYONE KNOW OF ANY RESTORATIVE JUSTICE VIDEO RESOURCES THAT ARE NOT RELIGIOUS?!

Restorative Justice in North America, birthplace of its contemporary worldwide expression from within criminal justice systems, grew out of a religious community, specifically as indicated the Mennonite community of Kitchener, Canada, as an explicit religious response to a social problem5. No culture exists without religious foundation, claims anthropologist René Girard.

If, as Girard continues to explain in an expansive theory of the genealogy of violence6, a “scapegoat mechanism” is generated by religion to address the problem of violence, by which sacrificial victims are immolated to restore peace and social cohesion, hen religion just may be the source of the corrective to universal scapegoating violence as well.7

Beyond Retribution: A New Testament Vision for Justice, Crime, and Punishment  (Marshall, 2001) is a stirring instance of rereading the Judeo–Christian founding texts to provide a basis, not for continued scapegoating violence in the Western secular state (which still has intact many trappings of a bygone religious era!)8 Marshall’s book is highly significant to “secular” Western culture, steeped in Judeo–Christian legacies, in its quest to move towards Restorative Justice.

In response to the Judeo–Christian sacred texts, two broad approaches have been taken: