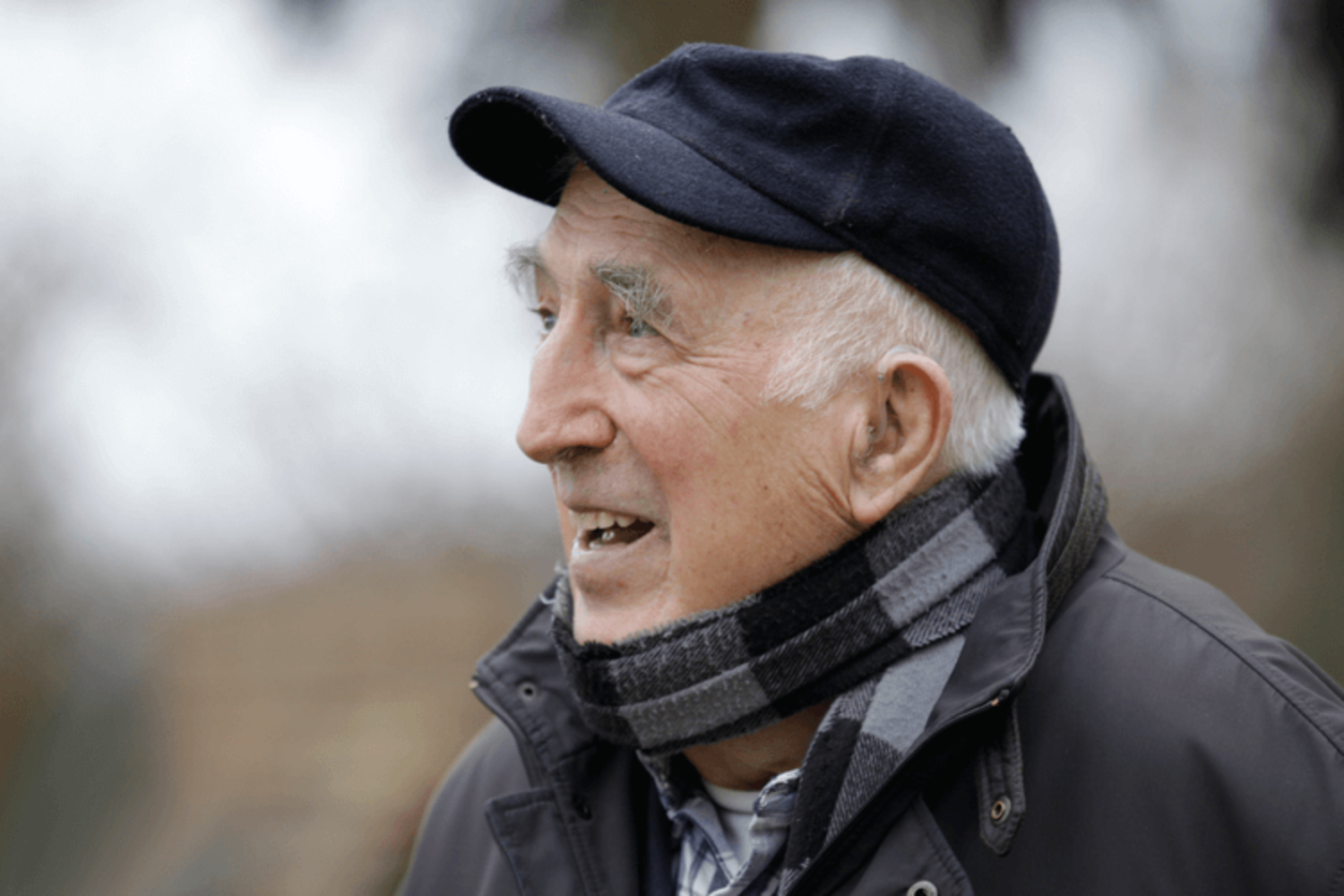 photo above: Jean Vanier, founder of the L’Arche communities, is pictured in a Feb. 17, 2015, photo. (CNS photo/courtesy Jean Vanier Association)

WN: What does one do with this revelation of a man almost universally considered a saint? My mind goes to: what, in the end is the difference between Vanier and (dare I type it) vile lying, multi-abusive Trump? Both trade/d in lies and false lives. Both put narcissistic self-gratification first at the expense of profound trauma inflicted on victims. Yes, both were/are frauds. My mind and heart have reeled since first knowing of this horror . . . And I look at my own sins of commission and omission . . .

Please read the letter by L’Arche International disclosing to its community–and the world–the profound decades-long tragedy for all the abused women.

Please see the reflection piece by Father Thomas Reese: “When Saints Fail“. I appreciate his commentary:

Vanier was once talked about as a possible recipient of the Nobel Peace Prize, even canonization. To discover that such a person was a fraud makes me angry.

At the same time, I ask myself, why am I surprised? History has taught us the flawed and sinful character of most famous men. Some of the founding fathers fathered children with their slaves. History is full of bad popes, bishops and priests. European and American history is full of great leaders and thinkers who were anti-Semites and racists.

During my lifetime, John Kennedy and Thomas Merton had their affairs. The “Me Too” movement has ripped away the curtain to expose men who are not the gentlemen they projected publicly.

Even the Scriptures describe people as flawed who played important roles in salvation history: Eve, Abraham, Moses, David and the Twelve. It is nearly impossible to find an important figure in the Bible who is not also a sinner. In Mark’s Gospel, nobody understands Jesus, not even his mother (Mark 3).

Does that mean that we must discard everything these sinners did? Do we stop honoring Abraham because he pimped his wife to Pharaoh in exchange for livestock and slaves? Do we stop praying the psalms because David had Uriah killed so he could have his wife Bathsheba? Do we burn the books of Thomas Merton because he had an affair? Do we close down L’Arche because Vanier abused his position as a spiritual father?

But forgiveness is something else.

I can forgive Eve, the Twelve, Merton and sins of weakness, but I am not ready to forgive Abraham, David, Theodore McCarrick, Vanier, Harvey Weinstein and others who abused their power to prey on the vulnerable. I will leave their forgiveness to God.

I am still angry because of the harm done to the people who were exploited by these men. I am also angry because they have made me a cynic when it comes to great artists, politicians and religious leaders. It has gotten to the point where I even take Mother Teresa, Pope Francis and Big Bird with a grain of salt.

I’ve been reflecting on some of the similarities and differences between what seems to have happened between Vanier and those he targeted and Mennonite theologian John Howard Yoder‘s abuse of more than 100 women. The similarity I find the most striking is the way a teaching, mentoring, pastoral, or even spiritual direction relationship was so closely connected — and, it seems, warped and manipulated — to serve the desires and purposes of a powerful man. [Head of L’Arche USA Tina] Bovermann spoke to me of the “pseudo-mystical justification” Vanier and his mentor Thomas Phillipe seem to have employed with their victims, each other, and themselves in rationalizing their actions. That strikes me as similar to the pseudo-ethical arguments Yoder always made in his own defense. The insidious nature of spiritual manipulation and abuse — which has driven so many from the church, as it can no longer be a safe place — threatens Christian witness and, indeed, the lives and spiritual health of all people.

Brett Fawcett in “The Sinner and the Sin” writes in Conviviuum:

[Vanier] presented sexual intercourse with himself as a kind of mystical experience into which he was inviting his victims. He offered “spiritual accompaniment” to women who had come to him because they were undergoing a crisis and thus were already vulnerable. He turned it into physical molestation. He pretended it was a kind of “care of souls.” Yet the same man who said, “To love someone is to show them their beauty, their worth, and their importance” reportedly told one woman whom he was trying to seduce, “It is Jesus who loves you through me.”

Vanier was worse than a hypocrite. His sins seem to discredit his entire thought and, with it, his entire work. How can we take his spiritual counsel seriously when we see what he used his spiritual counsel for behind closed doors? How can we hear his words about community being a place where we lower our walls and share with each other when we know how he invaded other people’s intimacy under the guise of mentorship? To think of the multitudes of people living in L’Arche—those innocent, childlike people, blissfully unaware of Vanier and his crimes—who now unwittingly exist in the shadow of these findings is sickening.

Here is what makes Vanier’s wrong most painful of all: His public teaching was true. His simple but pointed advice on love and community was correct. Our lived experience rebels against this choice.

So, what is left? If we can’t get rid of the teacher or the teaching, I think all that’s left for us is to find a new place for Vanier within his own thought. In other words, we need to see him as the kind of villain he so astutely warns us against.

We could make an analogy to the clerical abuse crisis. Priestly child rape does not discredit the Mass. On the contrary, the Mass’ re-enactment of Christ, the Hostium—“Victim”—being violated, His nakedness displayed on the crucifix, by the slithering, Satanic forces of this age for our salvation, is an indictment of the pedophile priest performing the ritual. The bleeding Body that is present as the Eucharist identifies with the trembling, assaulted body of the priest’s innocent prey.

Vanier admitted, “Those of us with power and social standing have subtle ways of hiding our inner handicaps, our difficulties in relationships, our inner darkness and violence, our depression and lack of self-confidence.” He recognized the dangers of authority even as he became just as disrespectful of others’ dignity. Perhaps it was a form of his self-awareness? Elsewhere in Becoming Human, he says that violence needs to be understood as an admittedly inappropriate form of communication and we need to listen to the message behind it. What was his own sexual violation of others saying? Did it come from his own fundamentally unfulfilled loneliness?

It may be hard to see how someone could be predatory and yet teach so beautifully about Christ. Yet we should remember the prophet Balaam from the Book of Numbers, who set out to curse Israel and who managed to successfully corrupt them, and yet who was so filled with the Spirit of God that, almost unwillingly, he pronounced blessings on God’s people that resonate throughout salvation history.

How such darkness and such light could flow from the same mouth will always be a mystery to us. But we can take solace and be affirmed in the necessity of L’Arche and its mission by recognizing that the great merit of Vanier’s teaching is how illuminating it is about, and how harshly it condemns, the failures of Vanier himself.

An accompanying article by Raymond J. de Souza, “On Being Jean Vanier“,  poses a simple question: “How do we deal with the latterly revealed corruptions of public figures?”.

At the end of this superb reflection he offers what must constantly reverberate for us all:

That might be the most frightening question of all.

As I continue to reflect on the Vanier tragedy, I think: If he only knew that the consolation and joy of an authentic Christian spiritual path is on a whole different level/dimension of experience that renders utterly despicable his grasping at “the pleasures of sin for a season”! C.S. Lewis: “Aim at heaven, and you will get earth thrown in; aim at earth, and you will get neither.” Vanier at least in part wasted a life aiming at chimera . . .

I keep a photo of Jean Vanier on my desk. It is painful to look at today.

I’ve written almost completely uncritically about the founder of L’Arche several times at America: I called him a “revered spiritual master and prophetic voice” whose messages “always bear repeating” in a review of his last book; I wrote America’s obituary of Vanier; I teared up on camera while talking with Tina Bovermann of L’Arche USA about Vanier’s life.

Now, L’Arche has released an internal report detailing credible allegations of sexual abuse against Vanier by six non-disabled women. The report says that Vanier initiated sex in the context of spiritual direction and offered “highly unusual spiritual or mystical explanations used to justify these behaviors.” This kind of behavior echoes the sexual abuse perpetrated by Vanier’s spiritual mentor, Father Thomas Philippe. The new L’Arche report also shows that Vanier lied about how much he had known about accusations against Father Philippe.

Ms. Bovermann, the L’Arche spokeswoman I interviewed just after Vanier’s death, spoke to my colleague Michael J. O’Loughlin about the abuse allegations against Vanier: “I can’t wrap my head around it,” she said.

Part of me wonders now if I was foolish, if I should have known better than to valorize any Catholic this way after watching Theodore McCarrick’s precipitous fall from grace in 2018 or even watching St. John Paul II’s record on sexual abuse be called into serious question after hearing the crowds chant “Santo Subito” in 2005. If such widely respected men could commit decades of abuse or turn a blind eye to allegations, why should I have believed Jean Vanier could not do the same?

I think of the women who had to endure the trauma of hearing a man who had sexually manipulated them be called a “living saint” when he was alive and as the world eulogized him. Although none of the women’s allegations were public until this morning, perhaps if those of us praising him had thought more critically about Vanier’s relationship with Father Philippe, we would at least have been more hesitant to canonize Vanier in our popular imagination.

Mourning and grappling with the upsetting paradox of Jean Vanier has made me angry, but I am trying to resist letting it drive me to despair. I can no longer in good conscience call Jean Vanier a saint, nor will I hypothesize about any conversion he may have had before or after his death, but I cannot accept the disturbing truth about him as proof, as some have understood it, that sanctity does not exist. Rather, I think it challenges us to consider our own and others’ simultaneous capacity for profound goodness and evil, to seek models of holiness away from the world’s spotlight and to pursue holiness ourselves far from the spotlight, at the bottom of the ladder.