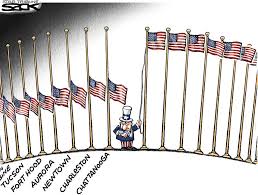 Nuclear strategist Albert Wohlstetter described this longstanding [American] policy as a “delicate balance of terror (ibid, p. 27).” In short, any number of nuclear war planners in Washington contemplated striking 295 Soviet cities, with an estimated death toll total of 115 million, and another 107 million dead in Red China, besides millions more in Soviet satellite countries (ibid, pp. 28 & 29). In some circles, as a kind of sick dark humour, the two bombs dropped on Hiroshima and Nagasaki due to “only” 200,000 dead, came to be called “firecracker nukes (ibid, p. 29).” (This is not to mention the millions killed since World War II with related devastation in at least 37 countries around the world, or the millions murdered through US proxy wars, CIA covert operations the world over, surrogate terror exported to countries throughout Central and South America for more than a century, and other parts of the world, etc., etc., etc… (See ibid, throughout the book.) )

One may legitimately contemplate the biblical proverb: For they sow the wind, and they shall reap the whirlwind (Hosea 8:7). The CIA invented the term “Blowback”, and Chalmers Johnson wrote the book: Blowback: The Costs and Consequences of American Empire. He pretty much lays it out in undeniable, brutal bluntness. This website gives a dizzying array of statistics that underscore the above biblical proverb.

When will we ever learn?…

The attack at a country music festival in Las Vegas that left at least 58 people dead is the deadliest mass shooting in modern US history – but there were six other mass shootings in America this past week alone.

No other developed nation comes close to the rate of gun violence in America. Americans own an estimated 265m guns, more than one gun for every adult.

Data compiled by the Gun Violence Archive reveals a shocking human toll: there is a mass shooting – defined as four or more people shot in one incident, not including the shooter – every nine out of 10 days on average.
• Las Vegas shooting – latest updates