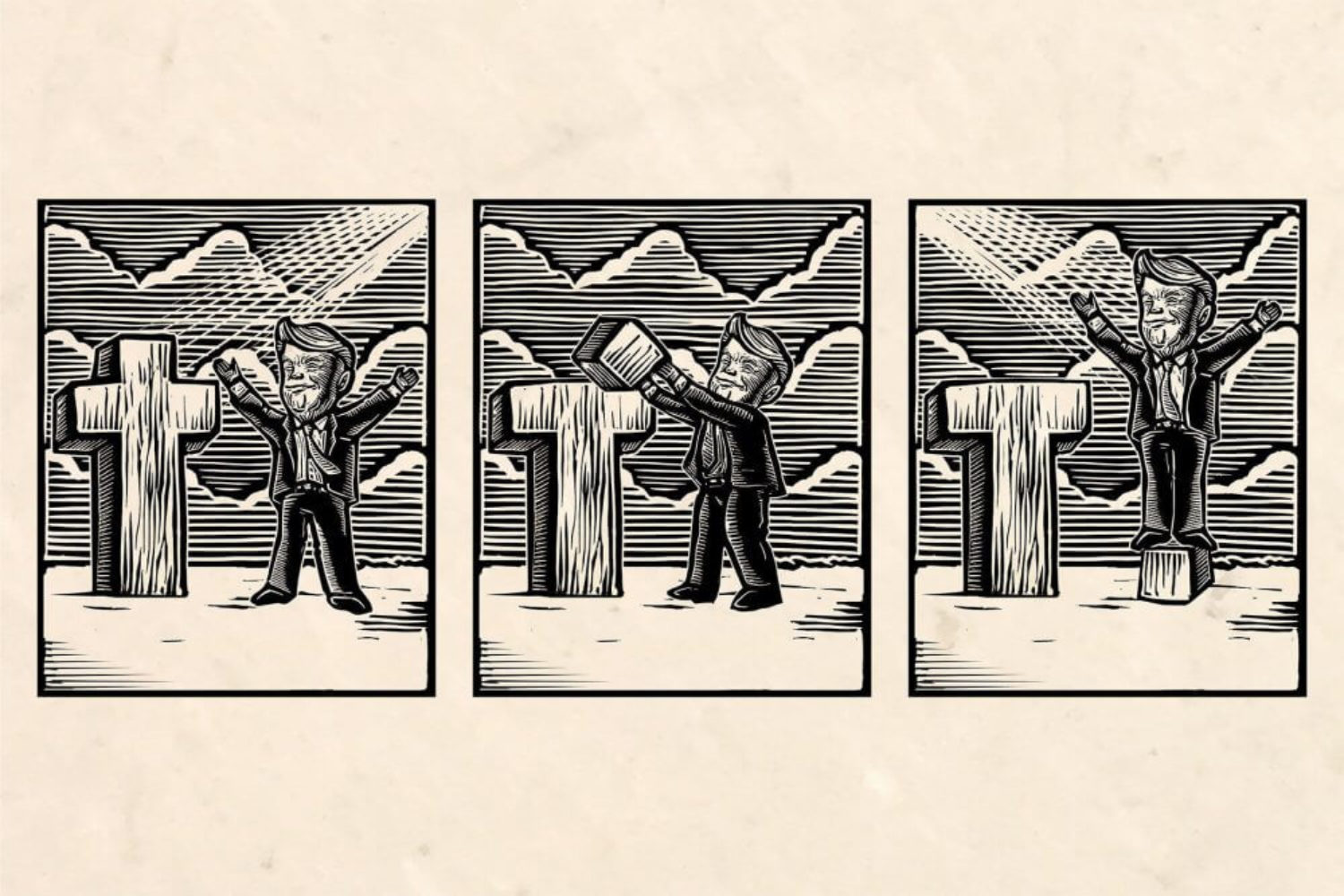 Illustration above by Brian Reedy. Think of the illustration in conjunction with this hugely ironic quote, one that said far more about Christian Nationalist sentiment than the good reverend knew:

WN: The embrace by significant segments of American Evangelicalism of the alt-Right is in many respects natural outcome of an “Unholy Justice Trinity” discussed in my “WAR and HELL”,  “War, Police and Prisons”, and “Just War, Just Deserts and Just Hell” pieces.

Update, October 9, 2020: This new publication (click on image for a long review!) is outstanding, and chillingly prophetic: Jesus and John Wayne: How White Evangelicals Corrupted a Faith and Fractured a Nation.

As Trump continued gaining ground in the polls, [Russell] Moore began to realize that the campaign represented nothing short of a battle for the soul of the Christian right. By backing Trump, white evangelicals were playing into the hands of a new, alt-right version of Christianity—a sprawling coalition of white nationalists, old-school Confederates, neo-Nazis, Islamophobes, and social-media propagandists who viewed the religious right, first and foremost, as a vehicle for white supremacy. The election, Moore warned in a New York Times op-ed last May, “has cast light on the darkness of pent-up nativism and bigotry all over the country.” Those who were criticizing Trump, he added, “have faced threats and intimidation from the ‘alt-right’ of white supremacists and nativists who hide behind avatars on social media.”

Trump, true to form, wasted no time in striking back against Moore. “Truly a terrible representative of Evangelicals and all of the good they stand for,” he tweeted a few days later. “A nasty guy with no heart!”

In the end, conservative Christians backed Trump in record numbers. He won 81 per- cent of the white evangelical vote—a higher share than George W. Bush, John McCain, or Mitt Romney. As a result, the religious right—which for decades has grounded its political appeal in moral “values” such as “life” and “family” and “religious freedom”—has effectively become a subsidiary of the alt-right, yoked to Trump’s white nationalist agenda. Evangelicals have traded Ronald Reagan’s gospel-inspired depiction of America as a “shining city on a hill” for Trump’s dark vision of “American carnage.” And in doing so, they have returned the religious right to its own origins—as a movement founded to maintain the South’s segregationist “way of life.”

“The overwhelming support for Trump heralds the religious right coming full circle to embrace its roots in racism,” says Randall Balmer, a historian of American religion at Dartmouth College. “The breakthrough of the 2016 election lies in the fact that the religious right, in its support for a thrice-married, self-confessed sexual predator, finally dispensed with the fiction that it was concerned about abortion or ‘family values.’ ”

For more than a generation, the Christian right has sought to portray itself as a movement motivated principally by opposition to abortion and the defense of sexual purity against the forces of secularism. According to its own creation myth, evangelicals rose up and began to organize in opposition to Roe v. Wade, motivated by their duty to protect “the unborn.” Albert Mohler, a prominent Southern Baptist theologian, described Roe as “the catalyst for the moral revolution within evangelicalism”—the moment that spurred the coalition with conservative Catholics that still undergirds the religious right.

In fact, it wasn’t abortion that sparked the creation of the religious right. The movement was actually galvanized in the 1970s and early ’80s, when the IRS revoked the tax-exempt status of Bob Jones University and other conservative Christian schools that refused to admit nonwhites. It was the government’s actions against segregated schools, not the legalization of abortion, that “enraged the Christian community,” Moral Majority co-founder Paul Weyrich has acknowledged.

By openly embracing the racism of the alt-right, Trump effectively played to the religious right’s own roots in white supremacy. Richard Spencer, president of the National Policy Institute and the alt-right’s most visible spokesman, argued during the campaign that GOP voters aren’t really motivated by Christian values, as they profess, but rather by deep racial anxieties. “Trump has shown the hand of the GOP,” Spencer told me in September. “The GOP is a white person’s populist party.”

Until now, the alt-right has presented itself largely as an irreligious movement; Spencer, its outsize figurehead, is an avowed atheist. But with Trump as president, the alt-right sees an opening for its own religious revival. “A new type of Alt Right Christian will become a force in the Religious Right,” Spencer tweeted on the morning after the election, “and we’re going to work with them.”

To alt-right Christians, Trump’s appeal isn’t based on the kind of social-issue litmus tests long favored by the religious right. According to Brad Griffin, a white supremacist activist in Alabama, “the average evangelical, not-too-religious Southerner who’s sort of a populist” was drawn to Trump primarily “because they like the attitude.” Besides, he adds, many on the Christian right don’t necessarily describe themselves as “evangelical” for theological reasons; it’s more “a tribal marker for a lot of these people.”

Before the election, Griffin worried that white evangelicals would find his “Southern nationalist” views problematic. But Trump’s decisive victory over Russell Moore reassured him. “It seems like evangelicals really didn’t follow Moore’s lead at all,” Griffin says. “All these pastors and whatnot went in there and said Trump’s a racist, a bigot, and a fascist and all this, and their followers didn’t listen to them.”

There is no way of knowing how many Americans consider themselves to be alt-right Christians—the term is so new, even those who agree with Spencer and Griffin probably wouldn’t use it to describe themselves. But there is plenty of evidence that white evangelical voters are more receptive than nonevangelicals to the ideasthat drive the alt-right. According to an exit poll of Republican voters in the South Carolina primary, evangelicals were much more likely to support banning Muslims from the United States, creating a database of Muslim citizens, and flying the Confederate flag at the state capitol. Thirty-eight percent of evangelicals told pollsters that they wished the South had won the Civil War—more than twice the number of nonevangelicals who held that view.

That’s why white evangelicals were the key to Trump’s victory—they provided the numbers that the alt-right lacks. Steve Bannon, Trump’s most influential strategist, knows that the nationalist coalition alone isn’t big enough “to ever compete against the progressive left”—which is why he made a point of winning over the religious right. If conservative Catholics and evangelicals “just want to focus on reading the Bible and being good Christians,” Bannon told me last July, “there’s no chance we could ever get this country back on track again.” The alt-right supplied Trump with his agenda; the Christian right supplied him with his votes.

Strickland recently told me that alt-right Christians see “racial differences” as “real, biological, and positive,” a view he insists is “merely a reaffirmation of traditional historical Christianity.” He argues that many on the alt-right who consider themselves atheists or pagans only lost their faith in Christianity “due to the antiwhite hatred and Marxist dogma held by the modern church.”

Strickland considers himself a “kinist,” part of the new white supremacist movement that, according to the Anti-Defamation League, “uses the Bible as one of the main texts for its beliefs,” offering a powerful validation to white supremacists for their racism and anti-Semitism. Strickland sees kinism as a successor to Christian Reconstructionism, a theocratic movement dating back to the 1960s that played a key role in the rise of Christian homeschooling. The movement’s primary goal was to implement biblical law—including public stonings—in every facet of American life.

After Trump’s victory, Edwards ferociously attacked the president-elect’s critics, Bible in hand. “The Bible says, ‘There shall be weeping and gnashing of teeth,’ and I want there to be that,” he said on his show. “Now is the time for retribution, and I want them to suffer. I want them to feel the righteous anger of a good and decent people. I want Trump to drive them into the sea.” He called on the “degenerates, perverts, and freaks,” and other “criminals who shilled for Hillary” to “make good on your promise to leave the country.” He added: “They can take Russell Moore with them on the way. That’s for sure. Good riddance. Please leave.”

Alt-right Christians like Edwards see their movement as part of a global battle for ethnic nationalism. Days before the election, neo-Nazis assembled at a rally in Harrisburg, Pennsylvania, to show their support for Trump. Matthew Heimbach, an alt-right Christian leader who founded the Traditionalist Worker Party, told the crowd they were in a worldwide struggle for the preservation of “ethnic, cultural, and religious integrity,” a battle that has been joined by “nationalists around the world that are fighting the same enemy.” That enemy, Heimbach said, is made up of “Jewish oligarchs and the capitalists and the bankers” who “want to enslave the entire world.” He ticked off some of the movement’s international allies: President Rodrigo Duterte of the Philippines, who has overseen a Hitler-inspired campaign of extrajudicial killings, and Syrian President Bashar al-Assad, who has displaced and slaughtered millions of his own citizens. To Heimbach, Assad “is fighting to defend his people against the globalist hydra of Saudi Arabia, of the terrorist state of Israel, and United States interests.”

Schenck fears that “Trump and his gang” have exposed an evangelical culture “that doesn’t know itself.” Sitting in his Capitol Hill townhouse, Schenck picks up his copy of Ethics, by the anti-Nazi theologian Dietrich Bonhoeffer. Bonhoeffer, he says, argued that because Jesus was a “man for others,” Christians are called “not to hold the other in contempt, or to be afraid of the other, or contemptuous of the other.” Yet when Schenck visited evangelical churches during the Obama years, he lost count of how many times he was asked, quite earnestly: “Is the president the Antichrist?”

Schenck still holds out hope, as does Moore, that a new generation of evangelicals will ultimately reject what Trump and the alt-right represent. “I do think something is going to emerge out of this catastrophe,” he says. “It’s going to help us to define what is true evangelical religion and what is not.”

But for now, he concedes, the religious right has forfeited its moral standing by aligning itself with the alt-right’s gospel of white supremacy. “Evangelicals are a tool of Donald Trump,” Schenck says. “This could be the undoing of American evangelicalism. We could just become a political operation in the guise of a church.”